The Imago Stage by Karoline Georges 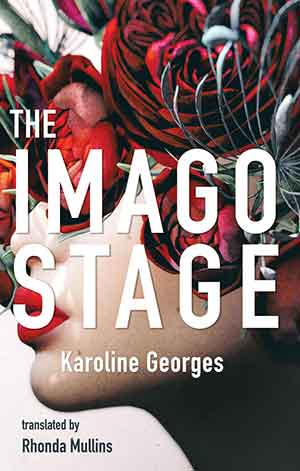 WHEN READERS MEET The Imago Stage’s narrator, she has been offline so long that she’s “starting to suffocate.” Her solution? “I’ve got to become an image again. As fast as I can.” Enter Anouk, her avatar. The novel’s first section is titled Reality—followed by Stupor, Space-Time, Immortality, Substitution, Synthesis, Disappearance, The Eternal Return, and, finally, The Image. Canadian author Karoline Georges’s narrative plays out between reality and the image.

Reminiscences and insecurities, disappointments and cruelties add flesh to Georges’s skeletal portrait in perfunctory prose. Her narrator learned about femininity from her grandfather’s pinups and her grandmother’s Hollywood stars, from I Dream of Jeannie, Wonder Woman, and Olivia Newton John. Jeannie and Wonder Woman are transformational: by spinning and blinking, they are reborn. Olivia Newton John is “a goddess . . . better still: a fictional character.” Even then, she was learning how to become Anouk.

As a child, our narrator studied particular women’s transformational powers and recognized her capacity to blur reality and fiction. “That was my first career choice. Fictional character, body of light on a screen.” As an adult, she transforms her own reality and creates fiction; for work, she models and, in her off hours, becomes Anouk. “A career as a virtually static object was perfect for me . . . spending as much time as possible being passive, as if already I barely existed beyond the image.”

The novel hinges on the theme of perception. Initially, the narrator perceives herself through others’ images: “I was learning to collect myself.” But becoming the photographer “creates a bridge between reality and fiction. Between life and death.” Her artistry reveals other means of transformation and preservation, but a family member’s illness challenges the limitations of her creativity nevertheless. With few personal relationships, this potential loss makes her yearn for “a whole truth that substituted for movements of the body, matter, time,” and digitization offers unconventional solutions.

Thematic layers and resonance add complexity to this novel of ideas. Georges won the 2018 Governor General’s Award for French-Language Fiction for this novel, De synthèses; its English translator, Rhonda Mullins, previously won a Governor General’s Award in 2015 for translating Jocelyne Saucier’s Les héritiers de la mine. These are the kinds of connections that The Imago Stage’s narrator forges with Anouk: real but as much about separation as connection.

The Imago Stage is flat, intensely orchestrated, and nearly lifeless: essentially and purposefully so.