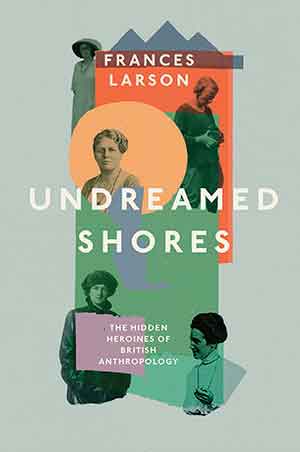 FRANCES LARSON IS AN anthropologist at the University of Durham and the author of three books on anthropologists, collectors of artifacts, and beheadings. Undreamed Shores is her latest addition to this list. It traces the lives of Britain’s first female anthropologists—a group of five women, all educated at Oxford in the early twentieth century. However diverse their backgrounds, all were confronted with the severe limitations to which English society subjugated their gender. While their brothers, male friends, and colleagues were privately educated and able to pursue university degrees and research positions, “most women were educated [to] become good wives and mothers.”

We not only learn of the lives of these extraordinary women, the cultures they studied, and the times they lived in, but we also see the field of anthropology establish and define itself, as Larson’s heroines struggle to survive in a world both hostile to their gender and their field. To Larson, the slowly growing emancipation of women in England in the early twentieth century did not merely coincide with the birth of modern anthropology but was a necessary contribution to it. A woman’s perspective is an essential part to the study of any society and particularly valuable in the study of subjects such as the societal role of women, family structures, childbirth, and sexuality. In the context of field research specifically, female researchers may be perceived as a lesser threat than their male counterparts and may thus be more tolerated by certain subject groups. And finally, Larson’s anthropologists were less likely than some of their male colleagues to put tales of their own bravery before the content of their work. Their books were “modest and attentive. True to their data and its limitations . . . their work was respected without being celebrated.”

Katherine Routledge, born 1866, sailed to Easter Island to study its Polynesian culture and past. Winifred Blackman, born 1872, lived with agricultural peasants of Upper Egypt for nineteen seasons. Barbara Freire-Marreco, born 1879, lived and worked in the pueblos of New Mexico and Arizona. Maria Czaplicka, born 1884, was a Polish citizen and traveled northern Siberia throughout the winter. Lastly, Beatrice Blackwood, born 1889, traveled to New Guinea twice and, for decades, held a leading role with the Pitt Rivers Museum in Oxford, contributing more than two thousand objects herself.

Braving all odds, these women made their way to Oxford at a time when there were only three university posts in anthropology across the whole country, and the department at Oxford had only began to take shape. Eventually, a troika of male professors from varied backgrounds, “the triumvirate,” ended up leading the department. None of these three professors had done fieldwork. And the fact that all of Larson’s women did go on to work in the field was, for some, due to the increase of its importance but, for all, born out of their longing to “travel far away.” Fieldwork was an escape “from the strictures of English society” and offered a temporary freedom that was lost again, once they came back. They had changed, but their expected role in English society had not. This dichotomy between who they were and who they were allowed to be brought tragedy for all of their lives, albeit to varied degrees.

Between the two world wars, anthropology’s center of authority shifted away from Oxford and an aging triumvirate to Bronisław Malinowski at the London School of Economics. Today, Malinowski is referred to as the “father of social anthropology,” having introduced a strong focus on fieldwork and taught a generation of anthropologists that went on to practice and teach around the world. Malinowski was Polish, like Czaplicka. They were friends born in the same year and had come to England at similar times. However, the tragically opposite fates of these two brilliant and driven people point to the divergent opportunities between men and women in early twentieth-century Britain.

A hundred years after her heroines met at Oxford, Larson found that these first five female anthropologists “remained peripheral to the histories . . . of great men” and set out to write a book that was to change that. With Undreamed Shores, Larson has not only made a superb effort in achieving this but has also given us, man or woman, inspiring examples of unusual bravery and strength in fighting all odds and daring to follow our dreams.

Undreamed Shores is an extraordinarily well-crafted, many-layered, and captivating book, in which the author makes the amount of research that underlies its chapters seem effortless. We read on, anxious to see how these five lives unfold and, on the way, find Larson opening doors to different cultures and a time far away.