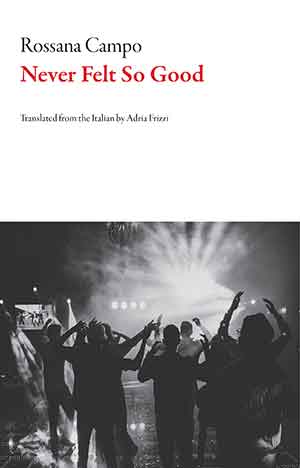 ROSSANA CAMPO (b. 1963) burst on the Italian literary scene in 1992 with a picaresque novel about underwear: her own. A movie version followed the success of In principio erano le mutande (In the beginning was underwear), and Campo, the daughter of Neapolitan parents who resettled in Genoa, was off and running. Like many Italian writers of her generation, especially those associated with the so-called Giovani cannibali (Young cannibals), her prose was a slangy, provocative narrative that explored female sexuality.

Both Campo’s themes and stylistic choices may explain why it’s taken twenty-eight years for English-language readers to get a taste of “what women talk about when men aren’t around.” In an essay that accompanies her translation of Campo’s third novel, Mai sentita così bene (Never felt so good), Adria Frizzi suggests some reasons for the neglect: “the American literary establishment’s (publishers and literary agents alike) perceptions of Campo’s writing appear to be largely based on the fact that it doesn’t fit familiar but rigid and often obsolete categories and expectations (literary vs. commercial; canonical vs. experimental; highbrow vs. lowbrow) or even established genres and subgenres (fiction vs. theatre or film script; romance, confessional, chick lit, etc.).” Frizzi quotes the novelist: “What I’m trying to do with my writing is to deliver maximum force and energy. In order to do this I’ve always tried to eliminate everything that sounds fake, cloying, sappy, literary and stuffy to me.” Campo’s project—and the source of her unique voice—is to transfer the immediacy of speech onto the page.

I first met Campo’s hilarious, spot-on satire in her second novel, Il pieno di super (Full tank), in which adolescent girls facing discrimination as meridionali (southerners) use humor as their protective shield. Few are spared in this send-up of racist teachers and dysfunctional families. (The title comes from a father’s sex boast to his wife—“Come here, let me fill you up”—as reported by their spying daughter.)

Specifically, Campo’s teenagers are trying to free themselves of the tentacles of an entrenched patriarchy. Their girl gossip is itself a transgressive act, and Campo renders their dialogue without censorship or punctuation. The same boisterous idiom and obsessive intimacy characterize the female protagonists of Never Felt So Good, who might be the same girls ten years later and living in Paris. Their lives unfold in all their messiness during an endless dinner party, arranged to welcome back Lucia, who has fled her “veeerry square” life to run off with a German biker. “Anyway, we’ve been making fun of her forever,” the narrator explains. “Because she’s really ridiculous, the type who doesn’t drink, doesn’t smoke, suffers from gastritis, is afraid of flying and getting locked in the bathroom at a bar, can you imagine?”

What defines the “crazy girlfriends” as much as their bad-ass jargon is their commitment to sexual freedom. Lucia is the butt of their jokes because she was married for five years without cheating on her husband. And cheating, as it turns out, provides the climactic bombshell that Betty is pregnant by Gianni, who is Beate’s husband and Ale’s lover. Confused? The evening is full of unusual twists, such as when the vengeful Beate, hell-bent to murder her rival Ale, joins the party, with a helping of pasta alla Siciliana. “It’s important to me,” says the narrator at one point, “not to hurt people’s feelings.” This comedy is more Grand Guignol than Who’s Afraid of Virginia Woolf?

Campo’s female characters transgress all codes of decorum and good taste. What’s important is that they not “suffer in silence” like windup dolls, that they bare their souls. It would have been easy for a translator to de-jargonize these rapid-fire exchanges, to smooth Campo’s raucous yawp. But Frizzi’s translation is true to the author’s fiercely pro-woman ethos and colloquial register. “There is no animal more invincible than a woman, nor fire either, nor any wildcat so ruthless” is the Aristophanes epigram that launches this novel. To defang this wildcat was never an option.