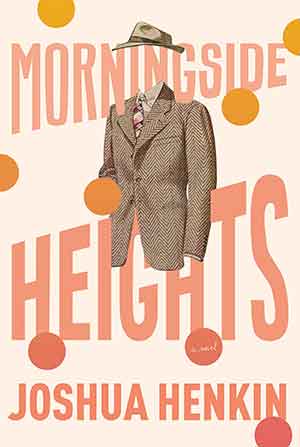 AT FIRST IT APPEARS that Morningside Heights is yet another campus tale of the professor-meets-grad-student variety, but Joshua Henkin’s new novel quickly sidesteps formula. Crisply and at breakneck speed in a brief first section, we learn that Pru Steiner has always had a weakness for older men, so it’s no surprise when she falls for Spence Robin, her charismatic but only slightly older Shakespeare professor at Columbia.

After that the novel takes on more texture and depth as it develops the story of a marriage and an oddly blended family. Spence is a certifiable star. After a Guggenheim and a Mellon, he wins a MacArthur, but at the age of fifty-seven, things begin to go awry. He stumbles, in language, in memory, and, eventually, in movement. His dementia appears slowly with his inability to work on, let alone finish, a book he has contracted to write and continues quickly to the point where Pru has to hire a caregiver to help out while she is at work as a development officer at Barnard.

In the early years of their marriage, Pru feels that “Spence’s success was her success, too. There was no separating them.” But at fifty years old, Pru is forced to see herself as separate, and the thrust of the narrative follows her growth and the redefinition of her marriage and herself. She has faced some difficulty in the past, mostly with trying to blend Spence’s son from an early marriage, Arlo, into their lives with their daughter, Sarah. But in dealing with Spence’s decline, Pru comes into her own.

Henkin touches us most deeply with the small moments and details—the descriptions of a clueless Pru trying to hire a caregiver for Spence, or her coping with Spence’s inability to see his condition, or her attempting to navigate the academic environment at Columbia when it is clear that Spence cannot continue his classes. She becomes fierce, something she never was before. She is also lonely for the first time, living with someone who isn’t really there against the backdrop of a huge, impersonal city. Henkin truly captures the specific ambience and feel of the Upper West Side of New York in his depictions of the apartments, the street scenes, and the dinner parties.

This novel could have been bleak or sentimental, yet it is neither. Henkin has managed to inject humor as well as pathos into a searing portrait of a family in crisis. There are some flaws along the way—Arlo is a bit too much of a tech genius caricature and his mother is a relic of hippie wanderlust. But Morningside Heights is beautifully written, and nothing mars the undeniable power of this poignant and very intelligent novel.