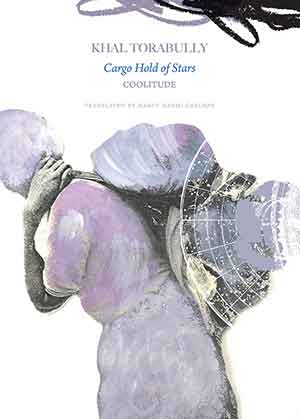 THROUGH NANCY NAOMI CARLSON’S translation of the French original, anglophone readers finally have access to Khal Torabully’s groundbreaking poetry collection, Cale d’étoiles: Coolitude. First published in 1992 and crowned with the Prix Jean Fanchette the following year, the text is notable for its conceptualization of “coolitude” as well as for its linguistic innovation and sensual archipelagic imagery (see WLT, Winter 2019, 27).

“Coolitude” reclaims the noun “coolie,” long used as a derogatory to refer to the Indian indentured laborers who replaced slaves on sugarcane fields in British colonies across the world. In order to reach their work destinations, Indian laborers had to undertake the dreaded kala pani crossing, which literally means the “crossing of dark waters.” “Coolitude” is a reformulation of this journey from one of loss—loss of country, caste, and community—to one of transformation and infinite possibilities: “I propose we be porters of futures, worker bees of worlds, sowers of languages, builders of bridges connecting continents poised for a healthy sharing.”

For Torabully, coolitude is neither static belonging nor desired return to India. Instead, it is a future-oriented rebirth that weaves connection between migrants from all over the world: “In saying coolie, I’m also speaking of every voyager barred from a ship’s registry, all who’ve ever embarked for horizons of dreams, whatever the ship they boarded or had to board.” This inclusiveness, however, falls short when it comes to gender: Torabully’s work is steeped in the male language of brotherhood, with the female only present metaphorically, as the “blue womb” of the ocean or the “carnal call” of an imagined lover.

Even as he evokes a global experience of migration emerging from “an open wound in the sea,” Torabully remains true to the contextual specificities of the kala pani crossing. The poetry collection is infused with the scents of cumin, thyme, and coriander that traveled overseas with the migrants, and Torabully’s native Mauritius is present through a plethora of allusions, ranging from the seventeenth-century fort (La Citadelle) looming over the capital city of Port-Louis to the bolom sounga of the island’s folklore. This subjectivity is addressed by the poet himself as he defines the text as “my vision of the ocean all of us crossed, though we didn’t see the stars from the same point of view.”

Quite strikingly, Torabully does not shy away from exploring the links between indentured labor and slavery, an impactful move given the rifts that exist between Afro- and Indo-descendants on previous plantation economies: “We are molasses, we are bagasse / my African brother descended from slaves / our skin is the trace / like yours, of the same dark race.” He is careful to note, however, the distinctiveness of the coolies’ Indian heritage as it comes to bear on this job once thrust upon the enslaved: “And if African gestures came to our hands as we cut the cane, the cracking and dancing of fingers remained ours, used to the tabla, often attuned to the ravanne’s great cry of hearts adrift.”

What Torabully describes above is part of a history of “endless métissage,” a constant mixing of cultures that shines through in the collection’s linguistic innovation. Carlson describes Torabully’s language as a “new French,” one that melds together “Mauritian Creole, old Scandinavian, old French, mariners’ language, Hindi, Bhojpuri, Urdu and neologisms.” If Torabully posits that his “true mother tongue is poetry,” his sense of belonging is to this unique, self-fashioned language: “And I speak my French tongue to point out my home port on the map of my discoveries.”

To translate Torabully’s poetic rhythm and “linguistic acrobatics” is no mean feat, and the translator’s foreword offers us valuable insight into Carlson’s creative process, including a detailed explanation of her “sound mapping” approach. She is overwhelmingly successful in her translations, though some polysemy is invariably lost, for example in the straightforward translation of nègre marron—which could also mean “brown Negro,” another expression of Afro-Indo connection—as “runaway slave.”

Torabully’s work is relentless in its optimistic hope for a world with borders, in which shared humanity is highlighted over separate origins. He does not forget the coolies’ suffering, which is ultimately ungraspable by language: “no grammar can express / the blood of men.” However, he consciously chooses to foreground their agency and resilience: “And I know that my crew will be among those erasing borders to broaden Humanity’s Homeland.” In today’s Covid-19 reality of closing national borders, Torabully’s collection takes on renewed appeal as it challenges us to dare to imagine a fragile and yet glittering tomorrow: “The horizon [is] a pink more delicate / than the first seashells’ exquisite skin.”