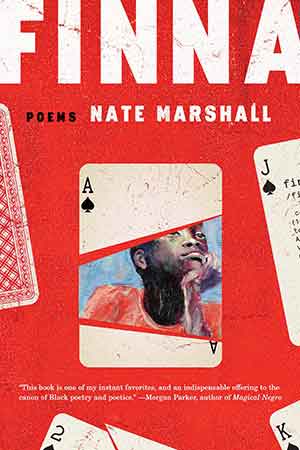 SLIPPERINESS IN LANGUAGE, often invoked as a postmodern outcome of oppositional poetry, could mean, in some parts of the world, slipperiness in life, literally social or physical death. Words carry consequences. No one understands this more than Nate Marshall, whose eponymous poem Finna catalogs near misses and narrow escapes that underscore a journey of linguistic and emotional survival. Such a journey is arguably emblematic and a necessary precursor for living fully as a human being and flourishing inside an art that, as this book testifies, is more than imaginative fodder:

i remember a million finnas
i avoided to get here. like the day
them dudes jumped me off the bus & i
was finna
get stomped out like a loose square. or
the day
they got to shooting at the park & i was
finna
catch one like an alley-oop. or the day
my grandma died & my grades dropped
& i was finna
not finish high school except i had a
praying mama
& good teachers & poems to write.

If, as poststructuralist critics remind us, language is destiny, Marshall also knows that language is likewise geography and the people “who you [matter] to.” Alerting his reader to its origins, a speaker announces, “finna comes from the southern phrase fixing to,” but one of the nobler aims of the book is to pay homage to his genesis, the city of Chicago where, yes, “bustdowns bloom in our mouths” but also where gangs give “the strong dap & safe haven / to go on being bookish / & breathing & walking in the hood,” and where the young poet’s tongue is shaped by a grandmother who “kept a dictionary on the kitchen table,” where the complicated covenants and codes of masculinity are passed down in silence and violence.

Everywhere in this book, Finna strikes notes of salvation and resistance. Collectively, the poems make a parable of vernacular culture, which is to say, Marshall constructs an eloquent and defiant freedom inside the very contours of speech that is designed to imprison. This battle is played out as a kind of verbal interplay where “we make shambles of their standards / we stand on them / & fashion an abolition / in diction.” In a series of portrait poems and origin stories, he names and writes himself into existence as “Nate Marshall” while outing the other “Nate Marshall” that a google search reveals is a white supremacist in Colorado. Then, of course, is the brutal poem “nigger joke,” which narrates a palpably tense conversation in a bar in a gentrifying neighborhood with a white man that exposes the limits of language and faulty logic of comparative suffering.

Marshall’s power is an unmitigated belief in the expressive and communicative powers of language to proffer agency and might, sustenance and strength, but he remains committed in writing poems that are authentic in capturing both the beauty and ugly reality of struggle in America. These poems work to embody that complexity if not to supremely imbue the world with the aliveness born of twisting and bending language as a measure of one’s enduring humanity: “let all my poems be / bowls or thrones or hairpieces or marriages. / let everything i make, if it should survive, tell the next world / mine were a people of faculty & faith.”