Brimstone: A Book of Villanelles by John Kinsella 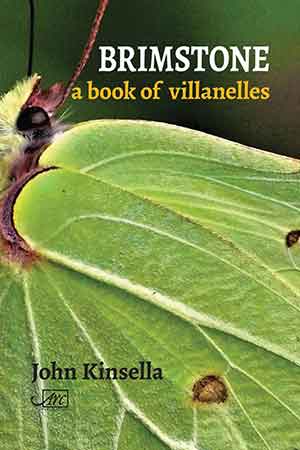 THE VILLANELLE OCCUPIES an unstable canonical history. Jean Passerat’s “J’ay perdu ma Tourterelle” (written in 1574, published in 1606) is the only example of the form dating from t he Renaissance, though as The Princeton Encyclopedia of Poetry and Poetics (4th ed.) notes, it was Théodore de Banville’s “popular handbook Petit traité de poésie française, [that gave rise to] the mistaken belief that the villanelle was an antique form,” a belief that “persisted tenaciously throughout the nineteenth and twentieth centuries.” In some contexts, the misapprehension persists: see, for example, the claims made on Poetica, aired regularly until somewhat recently on Australia’s national broadcast network: “The villanelle was embraced by the musician-poets of twelfth-century France; the troubadours of Provençal and the trouvères of the north, but its origin is Italian.”

John Kinsella is one Australian who is confused by neither the history nor the political possibilities of the form. This celebrated anarchist vegan pacifist remains Australia’s best-known contemporary poet, and Kinsella writes ferociously from a suite of compelling literacies. Brimstone is a tendentious, indeed capacious book, which, to lend from the title of another recently published collection (co-written with Sonic Youth’s Thurston Moore) weaves language together into a braid of remarkable unities.

As if the form provokes his themes (and following Passerat’s ur-villanelle in which a “lost turtledove” is mourned), Kinsella threads together texts either praising or memorializing nature. These poems flap ornithologically, their parrots, kittiwakes, honeyeaters, kingfishers, shufflewings, nightjars, et al. winging above poisoned rivers and burning trees, “slaughterhouses [being] fed sheep/pig/cow,” the deforested landscapes performing to an illogical “commerce of . . . new colonialism” where, as Kinsella painstakingly points out, there remains a “disconnect between cause and effect” and where the country air is full of “agrichemicals,” the midwinters “yellow with [early blooming, unseasonal] apocalyptic flowers.”

One such text, “Goading Storms out of a Darkening Field” (taken from The Silo: a Pastoral Symphony [1995]), demonstrates a set of complex settler connections to land: Kinsella’s lines watch the “[s]heep on their last legs. Dams crusted over” and echo the echoes of farmers “[c]ursing the dry, cursing the bitter yield,” as if to both sympathize and ironize these graziers’ lack of awareness. The ways in which Australian land is put to use, agro-industrially, in no small way co-creates the Anthropocene’s emerging precarities; increasingly, the once-fecund Australian landscape (not just in Western Australia’s so-called wheat belt, where Kinsella is based) is semipermanently drought-stricken, ravaged by rapacious megafires, scarified by erosion, arid, and ruined. This is a global trend, up to a point, and Kinsella’s ecological imaginarium has long understood the endgames of unchecked capitalism. As much as they are godless hymns, these villanelles are fiats: surveying colonized lands while the planet endures a fourth industrial revolution, Kinsella sees and sings of how sustained, instrumentalizing attacks are causing systemic collapse.

Amid the emergent ruins, though, Kinsella continues to find ways to sing new possibilities. Imagining himself alongside that other greatly invested tree-loving poet, W. S. Merwin, he “water[s] trees / using the zigzag technique to handle the gradient,” and this is understood not merely as a “survivalist act but one of constancy.” In other words, an act of faith and fealty, a generosity founded not just in anxiety but goodwill and kindness, too. Poets like Kinsella (and Merwin) are nature’s good neighbor and, of course, our moral and ecological exemplars.

Here is a poet who maintains a steadfast gaze, at once “not[ing] fresh constructions of roads and antonyms of nature,” while “look[ing] to learn / what our impact might or might not be.” This is a poetic language that can secure us, these villanelles weaving narratives that can hold fast against the as-if compulsive “repetition[s] / of crisis and peace and quandary.”