Heaven: A Novel by Mieko Kawakami 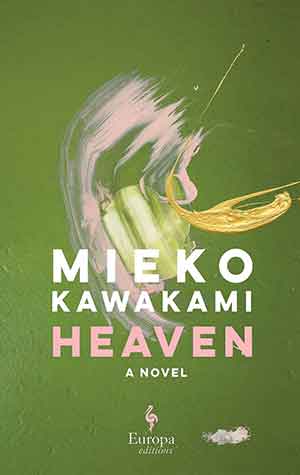 FORTY-SIX-YEAR OLD Mieko Kawakami refuses to trivialize the agony of adolescence; instead she bears witness to it. She has described her own childhood in Osaka, Japan, as a hellish experience. Her father often went missing, and she was forced to find work in a factory to help support her family. She pursued adulthood with a gritty determination. She tried singing but gave it up when she was told she couldn’t write her own lyrics. She turned to writing, and her novels and poems, which often play fast and loose with experimental bursts of prose, have catapulted her into international fame. Kawakami concedes, “I try to write from the child’s perspective—how they see the world. Coming to the realization you’re alive is such a shock. One day, we’re thrown into life without warning.” But the reader senses something more is going on. Kawakami seems to fetishize adolescence as the time of life that reveals a person’s deepest and purest self—before it is buried beneath the flood of adulthood’s expectations and disguises (see WLT, Winter 2021, 16).

Kawakami is captivated by that precious time of life when one is on the cusp of adulthood but still really a child. The author’s ability to mimic the rhythmic disturbances of a teenage mind is mesmerizing; she is a master of the interior voice. She instinctively grasps how one can feel silly and light one moment and be in the throes of anguish the next. In one of her earlier novels, Ms Ice Sandwich, she describes a lonely boy, whose family is in disarray, finding solace by visiting a supermarket worker each day who kindly gives him an egg sandwich.

In her new novel, Heaven, she explores similar territory. The narrator is a fourteen-year-old boy whose life is surrounded by horrors he must suffer in silence. He has a lazy eye, which has made him the target of the other boys who brutally beat him. His father has left home, and his mother, who is not his real mother but a recent replacement, takes quiet care of him. She prepares dinner but never speaks to him directly, and the two of them sit quietly eating while listening to the drone of the television. This silence is familiar to the boy; it is the silence he has been raised with, as well as the silence that keeps him from telling his teachers about his suffering. It is this same toxic silence he has always sensed in the landscape surrounding him that beats steadily to the heartless cruelties of the patriarchy. He never questions why he doesn’t fight back, but just knows he can’t; it is not his way.

The skinniest sliver of hope arrives with a letter from a schoolmate named Kojima. She is bullied too, for her stained clothes and dirty hair, but not as savagely as he. She wants them to start writing to each other, and he reluctantly agrees, afraid at first it is some sort of prank. Their letters have the strange aching sound of two teenagers putting their thoughts to paper for the first time, startled by the specificity of their own views. Their questions are simple at first: “What were you doing, when it was raining?” and “If you could go to any country in the world, where would you go?” Sometimes he tells her about things that fascinate him, like “spots on ladybugs. The height of bike seats. Snow globes.” They meet up a few times, and their conversations grow more personal but usually stop before each of them can really say what is on their mind. He is troubled by Kojima’s feeling that their suffering is holy somehow, like some sort of warped sacred ritual that ultimately serves some higher purpose for them and the others. When he reveals his doubt, she lashes out in anger. He shudders at her idealization of their torment.

Kawakami keeps a cool control over her protagonist, allowing him some leeway but never permitting him to see the promised land of adult perception, freedom, and reflection. There is something about her prose that is so immediate and pressing it blocks out the future almost as if it were a threatening force. We are forced to deal with her characters as they are living now: alone, vulnerable, and unprotected.