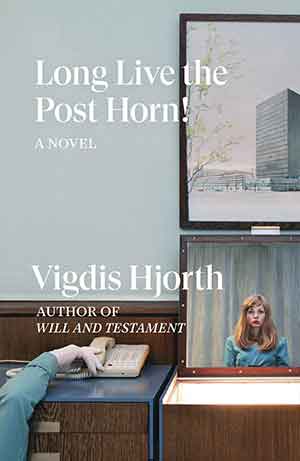 FOR HER SPLENDID Will and Testament (2019), Vigdis Hjorth allegedly based her narrative on family history (WLT, Spring 2020, 100). The autofiction occasioned a literary squabble that led to a rebuttal novel. This time, Hjorth’s slim but fulfilling novel focuses on a piece of recent Norwegian history. In 2011 the European Union considered allowing competition for the postal service delivery of letters under fifty grams in the nonmember Scandinavian country. Character, not plot, becomes the core of the exploration of the consequences of that action.

The fight against Labour falls into the hands of thirty-five-year-old Ellinor, a member of the small public relations firm Kraft-Com, whose slogan is “Selling the Power of Thought.” It is not a good time for her. She is suffering from a “diffuse feeling of loneliness.” She is in more than a slump. It’s not so much ennui as it is acedia. Her dark night of the soul seeps into every pore of her personal and professional life.

Her aimlessness is compounded by the departure of one of the group, Dag. His divorce, subsequent breakdown, and withdrawal from the firm complicates her already unsettled life. She is in an endless round of meaningless sex. When Dag’s body is discovered in the harbor basin in Calais, Ellinor is appointed the lead member of the diminished team to deal with the Norwegian Postal Workers Union to resolve the political impasse.

The title and epigraph for the novel are from Søren Kierkegaard (Repetition: A Venture in Experimental Psychology). They serve as appropriate signposts to the subject and themes and to the extraordinary examination of loneliness, local politics, and public relations.

Long live the post horn! . . . you can never be sure to coax the same tone from it twice . . . he who puts his lips to it and invests his wisdom in it will never be guilty of repetition, and he who, instead of answering his friend, hands him a post horn for his amusement, says nothing yet explains everything. . . . Just as the ascetics of old placed a skull on their desks for contemplation, so will the post horn . . . always remind me of the meaning of life.

The sentiment applies to Ellinor after she discovers an old diary of hers from 2000 and doesn’t recognize the persona encased in it. As months drop behind her, she latches onto a story of the postal service that seems to give her purpose and direction. She follows the trail of a presumably lost letter—addressed to a Helga Brun—that a postal carrier never abandoned.

Desperation leads to engagement. Ellinor’s search for the story behind what happened to Helga, the letter, and the postal carrier occasions the second most important quote in the novel. She exclaims her praise: “Long live the postman! Who finds your letter and puts it in the right letter box. Love letters, birthday cards, postcards, invitations . . . much-awaited confirmation of an all clear after medical tests. . . . Perhaps a bill, but we don’t count them . . . every link is [equally] vital . . . the certainty of it, the predictability of the Post Office, the repetition! Long live the postman, the post box, the Post Office and all its beings!”