The Alphabets of Latin America: A Carnival of Poems by Abhay K 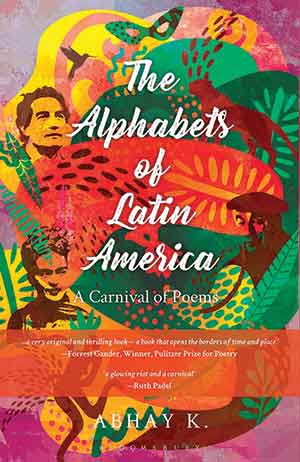 INDIA AND LATIN AMERICA, two distant lands sitting tens of thousands of miles away from each other, share an unusual bond through Christopher Columbus. He called the hitherto unknown world las Indias and its inhabitants, the Indians. It is not a surprise that this indelible bond comes alive in Latin American poetry; most important would be Rubén Darío’s modernismo, in which he craved to take his poetic journey to the Orient. Borges, Neruda, Paz, Severo Sarduy, Jorge Zalamea Borda, and several other poets all drank a lot of water from the Ganges, some in admiration like Paz, Sarduy, Zalamea Borda, and others looking through a materialistic criticism (e.g., Neruda).

However, India did not have such a counterpart until very recently, and as R Viswanathan, a retired Indian diplomat, rightly puts it: “Abhay K. is India’s counterpart to Octavio Paz.” Certainly it is too late, but better late than never. Abhay K., a poet-diplomat like Paz and Neruda, has offered in The Alphabets of Latin America a complete set of poetic odes to Latin America in its 108 poems, arranged alphabetically from “Amazon” to “Zocalo.” The collection is a vivid capture of history, vast geography, colorful culture, fiestas, sports, beauty, and sensibility. In some corner of the book, the readers get to celebrate samba or try poetic caipirinha or watch Oscar Niemeyer turning into Lord Vishwakarma’s avatar with his geometric football techniques. At the same time, it is a rare collection of poetry that has so many verses on poets and writers such as Machado de Assis, Fuentes, Paz, Ocampo, or the philosophical Borges and others. Furthermore, geography and nature lovers can experience Perito Moreno, Atacama, or the Nazca lines turning in a poetic art along with the favelas.

Readers take a journey into the pre-Columbian world through verses on Xunantunich, Tikal, Tenochtitlan, Machu Picchu, and more, and in the next verse come back to the modern world. Abhay K. blurs the concept of linear time or space. In the poem “Tikal,” “The temple of voices rises in the air / like the Mahabodhi temple / a Mayan Buddha meditates / under the giant Kapok tree.”

Abhay K., who hails from the Nalanda region of Bihar, where the famous ancient university was located, establishes a connection between two ancient civilizations, Mayan and Buddhist, by metaphorically placing Buddha under a kapok tree and connecting the Tikal pyramid with the Mahabodhi temple constructed at the site where Buddha attained his enlightenment. In his five-line poem entitled “Oscar Niemeyer,” he hails Niemeyer as “lord Vishwakarma’s Brazilian avatar,” explaining Lord Vishwakarma in the footnote. Such overtly deep references to Indian or Latin American mythology or philosophical analogies may pose a challenge for generalist readers, whom this anthology targets.

Overall, the collection looks like a poetic encyclopedia of Latin America and offers something to every kind of reader, be it an artist looking into Botero’s women or a revolutionary looking to read about Che Guevara. The book’s minuscule size and easy-reading small verses tempt readers to finish it in one go. The Alphabets of Latin America adds to the body of universal poetries by globetrotting diplomats and is a worthy read for exploring Latin America and its connection with India.