The Glass Constellation: New and Collected Poems by Arthur Sze 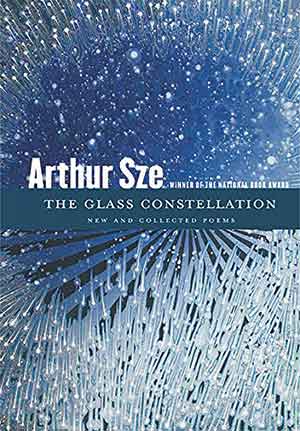 THIS COLLECTION IS a book I think you will want to live with, as I have been living with it for a few months now. Arthur Sze offers a stellar collection of lyrical poems that captivate the reader’s heart, even as the personae involved in the individual works also seem affected, sometimes dramatically, sometimes more subtly, but always moved. These poems are full of energy, sometimes boiling below the surface, or recoiling in a desert sunset, but always linking heart and mind with sensation and intellect. The poems presented here simply will not allow a reader to be complacent. We are drawn into a multitude of scenes that assault the senses in various ways at various times—often with the dual effect of life-affirmation in the midst of decay, hopes clarified, truth realized within contexts of mundaneness, confusing everydayness, if not outright violent indifference.

One of Sze’s striking writing characteristics involves his ability and propensity to create simultaneous actions, apparently unrelated, within a singular poem’s context. These apparently unrelated actions are, in a larger sense, connected, and his juxtaposing of scene and character with apparently contradictory elements serves as a (sometimes unsettling) reminder that we are all connected, and everything is connected, for better or worse. For example, in the first poem of “The String Diamond,” a pleasant “apricot blossom” occurs along with a number of other unpleasant events such as: a mistake in surgery, a compressed nerve, asphyxiation, and other everyday misfortunes. These tragedies, along with the mundane, and with the blossoming apricot, cause “wonder” about other “inchoate griefs” happening all the time. His choice of the word “inchoate” seems to climactically (or perhaps it is anticlimactic) verify a total truth of a situation not fully observable, at least at first glance. An artist is to help us see, to truly see, and Sze’s poems promote this visionary effect over and over again.

The poems engage the contemporary and the historical. Sze’s vision encompasses an amazing variety of animal, reptilian, and vegetal lives. It conveys a rich variety of ecosystems around the globe. It also reaches the heavenly bodies, the ends of the known universe, as well as an abundant variety of human cultures, but always reconnects to the human attempt to perceive.

As collected in book form, but also, even more impressively, within the singular context of an individual poem, Sze often presents a speaker enveloped and shaped by concentric circles. The “meaning” of the poem, or the sensual, artistic value, is to be understood in the various individual circles, but also in the cumulative whole. A consistent feature of Sze’s writing style is his collapsing of past and present into a single moment. In “Cedar Fires,” the speaker “thinks” of “the antelope carved in the rock” even as “we touch the Pleiades.”

Though I feel Sze’s poetic vision moves beyond labeling, quite a bit of his work might be classified as “necro-pastoral”—the living enduring in the midst of decay or death—or perhaps even “necromancy.” One of many examples of this occurs in the third poem of “Infloresence” in which “A shrinking loop becomes a noose” and

a red snake snags its epidermis, the mind snags,
molts from the inside out. Although sand plunges
in an hourglass – soon the last white particles
will vanish from the top – I ache for a second,
sulfur butterfly pinned over black paper, to stop:
but eelgrass in tidal water, I catch the scent
of tomato leaves on my hands, swing palms near
a horse’s head: flies flit and land, flit and reland.

It is exhilarating to see a poet’s evolution in style and content, evolving yet grounded in its original soul-stirring lyrical style. The Glass Constellation offers a complete course in not only how to write poetry but, even more, how to read it, to encounter it. How to allow poetry to encounter us. This is a volume I feel very fortunate to have encountered. I am living with it. You will want to as well.