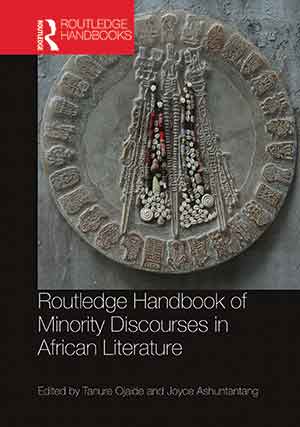 THE STUDY OF MINORITY groups and their cultural productions has generated many books and research papers, including Abdul R. JanMohamed and David Lloyd’s The Nature and Context of Minority Discourse. Most of these works are contextual, and the basis of minoritization that informs their theories does not apply in the African context. It is against this background that Tanure Ojaide and Joyce Ashuntantang’s Routledge Handbook of Minority Discourses in African Literature makes its contribution to the field. With twenty-eight chapters, this edited collection focuses on the various minority discourses in African literature.

The editors introduce the book by explaining their rationale for the project. Being from minoritized regions in Nigeria and Cameroon, Ojaide and Ashuntantang explain that their initial interest was to explore minority discourses in both countries from a comparative context, but they ultimately decided to engage minority discourses in the entire African continent. Moving beyond the Euro-American focus on race and “ethnic literature,” the editors establish the parameters by which they define minority discourse to include “issues of disability, the environment, gender, sexuality, and others.” By being more inclusive in what constitutes a “minority,” they push the boundaries of minority discourse in African literature to include any group that is dialectically opposed to a “majority” or a center, in whatever form it takes.

The second section is titled “Political and Racial Forms of Marginalization,” and all the chapters here interrogate minority discourse with reference to groups that have been minoritized based on politics, geography, or race. Joyce Ashuntantang’s “Anglophone Cameroon Literature” unravels the politics of marginalization that have plagued those from Cameroon’s northwest and southwest regions due to their linguistic and ethnic identity. Her chapter further explores how anglophone Cameroonian writers respond to political minoritization in their literary works.

“Culture and Language” is the book’s third section, and the chapters here explore the use of minoritized languages in African literature. Chike Okoye’s “Of Pidgin, Nigerian Pidgin Poetry, and Minority Discourses” examines the use of Nigerian Pidgin as a form of minority discourse in Ezenwa-Ohaeto’s poetry to express the “voice and quality of the lowly and suffering.”

“Patriarchal Domination, Gender, Sexuality, and Other Sociocultural ‘Minorities’” is the title of the fourth section of the book, and here the chapters explore the role of cultural constructs and structures in the minoritization of people based on gender and sexual orientation. Enajite Eseoghene Ojaruega’s “Representation of Women in Udje, an Urhobo Men’s-only Oral Poetic Performance Genre” positions women as a minority within the Urhobo patriarchal construct, and she draws examples from Udje poetry and performance in her analysis. In her view, women are “given subordinate roles of clapping and fanning the dominant ebo-ile (cantors); they dance outside the theatre of performance, but they are never the centre of the udje performance.”

The fifth section of the book is title “Intranational, National, and International Marginalization/Conflict,” and its chapters engage minority discourse using the category of the national. Charles Cantalupo’s “The Odds against Eritrean Literature” positions Eritrean literature as a minority literature in the context of international marginalization, especially in relation to Ethiopia. The sixth and seventh sections are titled “Literature and Disability” and “Recent Trends of Marginalities: Timely and Timeless.” Both sections contain chapters that treat the minoritization of those with physical and mental disabilities and the new ways, approaches, and contexts that we may conceive minority discourses in Africa. Sule Emmanuel Egya’s “Not Yet Season of Blossom: Writing Northern Nigeria into the Global Space” invites us to think of northern Nigerian literature as minority literature in Nigeria even though the population of northern Nigeria is, according to many sources, greater than southern Nigeria. His approach confirms the fluidity of what can be described as “minor,” especially with the idea that even the “major,” in terms of population and other factors, can produce minor literature.

The importance of this book hinges on its scope and ambitiousness. Intended as a handbook, it serves as reference material for scholars with interests in minority discourse, identity studies, African literatures, and comparative literature, among others. The categories of minority and minority discourse are deployed in various contexts in order to localize minority discourse studies in Africa.