Ibsen, Power and the Self: Postsocialist Chinese Experimentations in Stage Performance and Film by Kwok-kan Tam 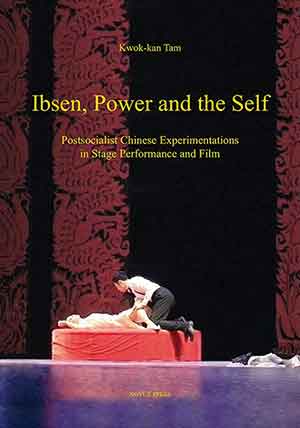 KWOK-KAN TAM’S recent study, Ibsen, Power and the Self: Postsocialist Chinese Experimentations in Stage Performance and Film, dedicated to the centenary of Ibsen’s introduction to China (1918–2018), is a revealing analysis of the innovative and adaptive productions of Ibsen plays in mainland China and Hong Kong, especially since the 1980s. This volume reveals how Chinese stage artists have interpreted and performed Ibsen’s plays. Their performance styles and innovations in scenic design constitute the author’s main focus.

Tam is a leading international scholar in Ibsen studies and comparative literature, and a pioneering scholar since 1984 in studies of the reception and influence of Ibsen in China. Tam’s Ibsen, Power and the Self explores the depth and breadth of the Chinese reception and creative internalization of Ibsen while returning the reader to the Ibsen plays in a fresh and observant way. The book, divided into eight chapters, with an insightful introduction and conclusion, investigates Chinese adaptations of A Doll’s House and five other Ibsen plays: Peer Gynt, Ghosts, Hedda Gabler, The Lady from the Sea, and The Wild Duck in various forms of modern Chinese theater, traditional Chinese opera, dance, and film.

Tam argues that the Chinese stage has evolved as a space for political and cultural debate in modern Chinese society. Ibsen’s A Doll’s House has been staged many times since the early twentieth century, but the productions reflect ideological inclinations in presentations of Nora in different periods. Tam’s analysis posits a turning point in the evolution of Chinese culture from its socialist history to its postsocialist phase, as the Chinese self, as seen in these Chinese productions of Ibsen’s plays, moves from a power-based dynamic to a more fluid and variable dynamic of gender identity and body imagery. Tam’s incisive analysis is particularly compelling in the fourth chapter, where he explores the visual presentation of Nora’s multiple selves in the 2010 Norwegian-Chinese dance production of the play. His interpretive approach relates the psychoanalytic impact of Nora’s various figures to the cubist style of visual art, in which the subject is seen simultaneously from multiple perspectives, resulting in an inner portrait of psychological complexity. That “Nora has visually changed from a singular self to multiple selves” is an original line of thought that invites further analytical development.

Many rare photos from Tam’s private collection are integral to the value of the book. Many of these stage photos are made available to the public for the first time. These photos, many in color, appear in chronological order, showing ideological and paradigm shifts in performance style. This beautiful book is an example of intercultural performance studies, with a wealth of materials from theater archives in mainland China, Norway, and Hong Kong, as well as a philosophical inquiry into the history of Chinese selfhood.