The Monster I Am Today: Leontyne Price and a Life in Verse by Kevin Simmonds 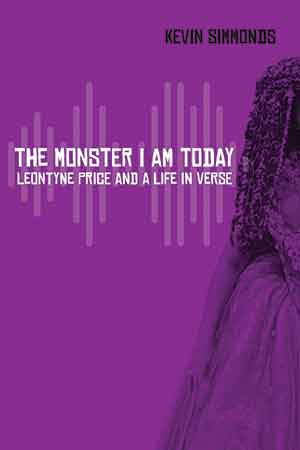 STRUCTURED IN THREE movements—Overture, Performance, Postlude—The Monster I Am Today: Leontyne Price and a Life in Verse is a fearlessly hybrid text, layering such elements of creative nonfiction as research, reportage, personal commentary, and memory upon the musicality, intimate reflection, brevity of line, and stanza of the short lyric poem (see WLT, Sept. 2018).

The easiest approach to this volume is to assume it to be a collection written in tribute to the acclaimed soprano of the title. It is not. A few pages in to “Overture,” the reader realizes that “and” is the operative word of the subtitle. Form, meaning, and creative thrust of the work all hang on it. Although she appears on more pages than not, Price is neither topic nor central character. Functioning more as model than muse, more idea than ideal, she remains a shadowy presence—the embodiment of self-constructed sound, achievement, ascendance, irony:

Opera: Italian for “a work, a labor”; the feminine Latin root op: “to work, produce in abundance.”

Feminine work of abundance – that’s what I sought to behold and become.

The first time my friend Brian called her “Pri-ce” (Pre-chay), I hollered.

Dizzied by her wallop, queens are wont to add a second syllable to rev.

La voce, feminine. To penetrate a queer man as only a woman can.

The above-quoted passage is soon followed by one reminiscent of the deadpan humor of James Thurber, in which:

With her convulsing on its edge, Momma’s bed collapsed, spilling Cherie and us (Aunt Trina, Cousin Lauren and me) onto the floor. Face red and swollen, Cherie laugh-wept without once taking her eyes off of Michael transforming into a monster.

This, of course, is an accounting of the 1983 music video Thriller. Along with speaker and family, readers witness again Michael Jackson’s transformation from fun-loving and pretend-scary (if endearingly semibashful) teenage boyfriend to ghoul—resurrected, relentlessly menacing, immortal. The last of these qualities, as in all such transformation narratives, is the one that matters. The scene closes with the speaker confiding that this was the moment when he “swore off teenage idolatry,” vowing to “remain solemn as when the priests raised the Host and, on my knees, I rang the bells – altar boy full of shame.”

Part 2 opens with an apparently straightforward epigraph: “monster (n.): from the Latin monere, ‘to remind, bring to (one’s) recollection, tell (of); admonish, advise, warn, instruct, teach.’” Unstated in this etymology is the mixed nature of the monstrous. Like many Latinate words, monster entered the English language by way of Old French and described a creature “part human, part animal”—in the manner of sphinxes and minotaurs, beings regarded with awe. Hence, the notion of the monster as “a marvel.” Titled “Performance,” this section contains works focused on musical performance as well as the performance of identity. Consider:

They bind to my voice

“Postlude” contextualizes the speaker’s early idolizing of Price alongside his development as vocal performer:

Early psychiatry pathologized homosexuality as evidence of an arrested adolescence. . . . I marvel at how my own stunted development – emotionally, sexually, socially – mirrors my musical development.

Music remains pseudosexual for me, and I, long practiced in failure, a defective instrument.

By the close of this volume, Simmonds’s reader is akin to the trusting sweetheart: face-to-face with the Monster, she is reassured that it was all in good fun, a romp, no harm intended. But the video audience reads in the hero’s backlit eyes the promise of transformations yet to come. What promises await Simmonds’s reader? Poetry and prose; lyrics borrowed from pop standards; reports and reviews of Price’s performances; explanatory notes; mock FBI memoranda; catalogs of racist and antigay slurs; confessions in the tone of private diaries or letters; themes of recognizing and claiming literary voice; queer coming-of-age narrative, and more.

The Monster I Am Today: Leontyne Price and a Life in Verse may well prove to be the ultimate hybrid: a monster of a book, to be read and reread, not in parts but whole, attending and attentive to the body of its “dark molasses sound.”