Arab Political Thought: Past and Present by Georges Corm 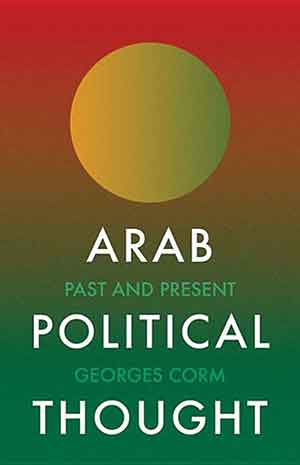 As events unfold in the Arabic-speaking Middle East, whether related to the Arab-Israeli conflict, to the war in Syria, or to Trump’s so-called deal of the century more recently, we observers might be wondering what Arab intellectuals think, how they have been thinking for many decades now about politics in their respective countries and in the region. Apart from the occasional media appearance by English speakers like Palestinian American historian Rashid Khalidi, we likely lack historical perspective when it comes to Arab political thought. A recently published comprehensive overview by Lebanese economist Georges Corm goes a long way to fill this gap. This is not another work attempting to delve into the “Arab mind” but rather to track the evolution of Arab thought from the nineteenth century to the present.

A professor of economics, political science, and contemporary history of the Middle East and North Africa, Corm has authored numerous works in French and Arabic but has little name recognition among readers in English, a reality that is somehow emblematic of one of his main points in Arab political thought:

The major problem of secular or modernist thought was not its failure to conform to the realities of the Arab world. . . . Rather, its near total invisibility in academia and the media, both Western and Arab, is unquestionably what stifled it in favor of debates that were exclusively theologico-political, redundant, and circular. Whether they were portrayed positively or negatively, these debates continued to be the focus of what bordered on being a marketing campaign to promote the different Islamic movements and their leaders as if they constituted the main political and social force in the Arab world. This state of affairs led to a vicious self-perpetuating cycle.

Myriad forces have conspired to sideline progressive Arab voices, some inside repressive Arab regimes and others within universities, think tanks, and governments with their own agendas. Corm’s book provides us with about three hundred pages of analysis and detailed accounts of Arab thinkers who have been neglected, silenced, or even assassinated, voices that could provide a more accurate, challenging, and profound way of looking at the Arab world. Not surprisingly, the issue of Islamism versus secularism underpins much of his analysis.

The book opens with a rundown of cultural touchstones ranging from Abu Nuwas (757–815) to Kahlil Gibran (1883–1931), and includes mention of such icons as Umm Kalthum, names that even noninitiates will have already heard. He moves on to chapters dealing with religion and national identity, the epistemological frameworks of modern Arab thought, writers who grapple with the profound effects of oil wealth, the issues behind the seemingly unresolvable differences among Arab peoples (the Palestinian question, American hegemony, the re-Islamization of the region), the relics of the Cold War, feminism within the Muslim context, the successes and failures of Arab nationalism in its heyday, and the pitched battles between modern secularists and religious conservatives over decades, or even centuries. This handbook approach makes the book ideal for classroom use or even for an adult continuing-education program like OLLI that seeks to touch on the key areas of Arab thought from the Arab perspective.

One of the final chapters, and perhaps the most useful, deals with attempts at ideological reconciliation, a topic unlikely to make headline news but which introduces such concepts as the wassatiya, or middle way, and the Islamic reformist thought of such writers as the Algerian Mohammed Arkoun.

As I was working on this review in an apartment shared with my ninety-eight-year-old aunt above the port of Beirut in the summer of 2020, the blast of August 4 destroyed the apartment, almost killed me, and shattered the computer I was working on, even tearing the cover off Corm’s book. The ideas presented here have become all the more urgent. May Corm’s voice be heard and his ideas implemented in these more than troubled times.