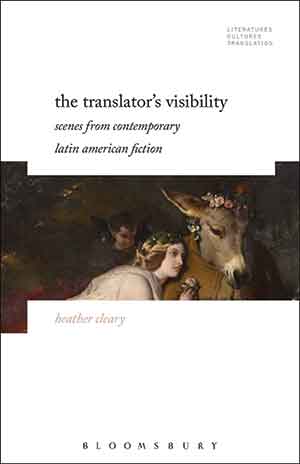 THIS MONOGRAPH’S overarching argument complements the burgeoning studies on translation by examining the heralded richness of contemporary Latin American fiction available in English. Heather Cleary’s conceptual framework is an affable counterpoint to Lawrence Venuti’s emphasis on the tensions implicit in gatekeepers’ “domesticating” or “foreignizing” translation. She ably historicizes Pascale Casanova’s views on world literature and false and true friends (i.e., illusory affinities in translation). Those precursory ideas can be fine-tuned by pursuing Casanova’s assessments of translation as domination rather than violence in “Les belles infidèles” (La langue mondiale: Traduction et domination, 2015). Similarly, her serviceable novels are restrictive choices that present a skewed view of a very diverse and larger tradition.

The challenges to translators of the standard performative writing and lexicon of Aira and Bellatin, authors she privileges, pale in comparison to the linguistic lavishness offered by Caribbean writers, from Guillermo Cabrera Infante and Luis Rafael Sánchez to Rita Indiana or Wendy Guerra today, by hipper, younger authors from the Andean region and their complex speech; or for that matter the fiction of older Argentines like Juan Rodolfo Wilcock, a translator; or Ivonne Bordelois and Héctor Bianciotti, who write in French and Spanish. Still, Cleary adamantly introduces her “Argentinizing” arguments and how she devised her corpus (a valuable exception is the Mexican Cristina Rivera Garza) and rightly does not devote a stand-alone chapter to any of her authors.

Her assertion about the role of sociocultural politics in translation, that “the problem with translation in Argentina, then, is the publishing industry itself, insofar as it is increasingly governed by the mandate of expediency established when a multinational media conglomerate takes over,” is equally applicable to the entire Spanish-speaking world, factoring in the foundational role and hegemony of Spanish publishers vis-à-vis translators. Cleary does not problematize that her authors, for whatever reasons, did not have to change languages. Although she acknowledges Hernán Díaz on Borges, she undervalues his translatable history: an Argentine whose first language was Swedish, moved back to Buenos Aires, and later to London and New York, where he wrote an Aira-like nineteenth-century western in English, the Pulitzer finalist In the Distance (2017), rendered into Spanish by a Basque in 2020.

Full attention to the “boom” authors’ comments on their practice—rather than a fleeting scrutiny of Cortázar’s, who translated Defoe and Poe, or of their fiction—would have enhanced Cleary’s objectives. With the exception of Edith Grossman’s, she has not sought those explanations in Gregory Rabassa or Suzanne Jill Levine, despite her insisting on the need for such research. Such lacunae are surprising when Cleary seems to mine every archive and when those translators provide ample evidence of their agency while working with earlier experimental novels. Equally astounding is the absence of assessments by translators of the cohort Cleary inspects, among them Chris Andrews (for Aira and others); and Natasha Wimmer for the noticeably absent Bolaño’s infinitely richer linguistic registers.

Not an issue for her book, it is more urgent to evaluate the hasty commercial translations into Spanish of works by nominally Latino writers who had English imposed on them than to survey trifling US-based Argentines whose Eurocentric prose is too fleeting to leave much of a trace for translation, even considering demands for complying with correct identity politics for translating. In that regard, a more enlightening sample for juxtaposing feminism and world literature would be the less metafictional prose of Selva Almada, Mariana Enríquez, Samanta Schweblin, and Ariana Harwicz, all Argentines. To her great credit, Cleary devotes considerable attention to an undervalued work, Salvador Benesdra’s El traductor, and her discussion of Aira’s La princesa primavera is noteworthy because the protagonist’s absence of regionalisms in her prose is very significant.

As Spanish translator Javier Calvo contends in El fantasma en el libro (2016), it is a matter of his colleagues’ being thoroughly capable in the target language and in the one from which they translate. The jury is still out on that bailiwick in academia. The Translator’s Visibility’s 108 notes and twenty-page bibliography establish that its brevity (including a sententious coda for undergraduate teaching) pivots on parsing academic agendas (patriarchy, power, scene, violence, etc.), averting a good dissertation from becoming a heartened study that leads to major reinterpretations. Cleary’s devotion to her topic is certain, and she uncovers fascinating material and is convivial; yet her arguments are dispersed by an endogamous corpus, and thus many conclusions cry out to be translated fluidly and fully.