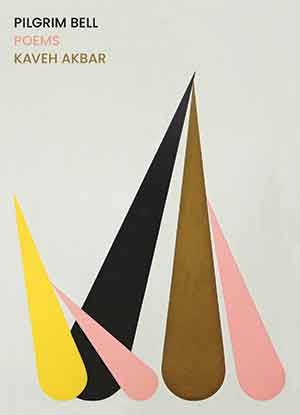 THE POETRY OF KAVEH AKBAR reminds you that the body is a temple and that the most astounding shit happens in temples. Pilgrim Bell, the second full book of poems from the Tehran-born author of Calling a Wolf a Wolf and the chapbook Portrait of the Alcoholic, is emphatic and honest as it ekes a journey not an ounce less embodied for its emergent spiritual and political edge.

Sitting still through Akbar’s poems can be nearly impossible. Better to pace with the more restless verses, where Akbar’s speakers carry the aura of exquisitely shambled tall tales, performing minor miracles of bodily audacity across an unfettered page. A master of painting pollen-thick blooms of virtue, vice, and eccentricity, of the extreme and indiscriminate germination of every seed of personality on the page, Akbar framed the figures in his previous collection with exultant disparagement, undertaking an inverse apotheosis: “I am sealing all my faults with platinum / so they’ll gleam like the barrel of a laser gun,” he writes.

Some of the poems in Pilgrim Bell carry echoes of that ethos, bodies (the poet’s body, iterated) experiencing little Kafkaesque metamorphoses. “God bricked up my mouthhole,” he writes in “Vines”; “his fists were white as gold there were / roaches in my beard.” So much stronger the contrast, then, when we encounter the disenjambed titular poems in this collection, “Pilgrim Bell,” tolling five times throughout the book like the azan, the call to prayer. Pillar-like, forcefully end-stopped and majusculated in a style elsewhere alien to Akbar, they clobber trails of thought and scatter the scansion, painstakingly reorienting these new poems into spiritual reflections on paradoxes of literacy and tonguelessness, holiness and sacrilege, emptiness and being, knowledge and innocence.

Not that askesis is quite Akbar’s prescription. One poem-prayer appeals, “my sins / were practically devotional: two peaches stolen from / a bodega, so sweet I savored / even what I flossed from / my teeth.” (As he writes in one of the titular poems, “You can either be. / More holy or more full but. / Not both.”) Instead, Akbar plays with a devotional agnosticism, a discipline of forgetting that creates space for being and becoming. In “The Miracle,” the originating myth of Islam unfolds as the angel Gabriel squeezes the breath, “the air of doubt,” out of the Prophet protesting his illiteracy, until he finds himself struck with the ability to read the scriptures. Here, our inner emptiness, “the vast cavities you have spent your life trying to fill,” is inverted into a small salvation: “Whatever you aren’t . . . is what makes you – a house is useful not because its floorboards or ceilings or walls, but because the empty space between them.” Perhaps part of the miracle is that literature is a thing that can fill us as though it were a substance, we who are “just one long desperation / to be filled.” Appetite and language join to find their guiding metaphor in the body as Akbar revels, “It’s delicious / being so governed // by the primacy / of my tongue.”

It is difficult to tabulate the impact, for a poet, of being born to a language other than that in which one writes. How much more incalculable, then, the legacy of losing that language, as happened for Akbar when his family moved to America? In Pilgrim Bell, what is lost is ever-present, and what is gained is always suspect. In “My Empire,” Akbar traces a journey from ignorance into experience in the context of American imperialism; once “Clueless as a pearl” and “too stupid to rage at anything,” the speaker announces, “Whatever I learn makes me angry to have learned it.” In “Forfeiting My Mystique,” he writes: “I would / happily trade all my / knowing for plusher / carpet, higher ceilings,” a spaciousness achieved in “Against Memory,” the book’s luxuriously typeset, penultimate poem. Even here, though, there is a kind of duplicity. In “The Palace,” the long poem that ends the book, a speaker grown restless and “monstrous / with ease” wrestles with the “[c]omfy, burning” throne at the seat of American imperialism and bluntly surveys its destructiveness.

“The tapestries either fall apart / or they don’t,” Akbar writes—lines that encapsulate the knife’s-edge miracle of artistic creation. Pilgrim Bell plays with form, association, and recursiveness in bold, vivid patterns, and the threads hold together. Akbar achieves the unique position of being the one poet I never read aloud. Perfect on the page, the voice and personality of each poem are thoroughly, itchingly alive, with an intimacy that, for all its naked self-revelation, feels bound to be engaged in the work of nations.