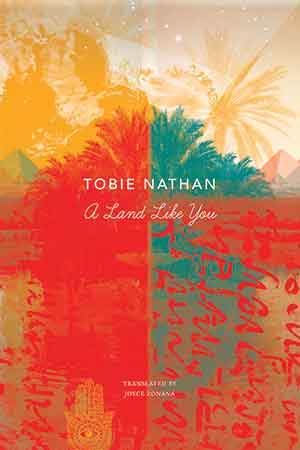 A LAND LIKE YOU follows Egypt from 1918 to 1952, as Western commodity capitalism, wars, foreign occupation, and imported ideologies (e.g., nationalism and its children, Islamism and Zionism) shape its entrance into modernity. Focused on Cairo’s poor Jewish alley (hara) and Muslim delta villages, this hypnotic novel shows how Egypt came to sever its ancient bond between Muslim and Jew, intertwined cultures that call humans “Children of Adam.”

Nathan’s epigraphs—fragments from Muslim songs, Baudelaire, and the Song of Songs—prefigure and epitomize that bond, while Esther, visionary mother of the protagonist, Zohar, sometimes chants a “Judeo-Arabic sabir (pidgin),” befriends Khadoujah, a Muslim enchantress, and declares, “We live beside the Arabs the way a man might live beside his innards. Our tales fill their Qur’an, their tongue fills our mouth. Why aren’t they us? Why aren’t we them?”

Narrative voice and tense shift seamlessly throughout the text. The elderly Zohar’s “I” frames the novel from a near-present but yields to the main narrator, omniscient and rooted in the simple past, interspersed with intrusions from that “I” and a third person voicing historical context in the simple past. This braiding produces a fairy-tale aura suited to a tale strewn with afrits (demons), magical incantations, and mystical events.

The world of Zohar, his lover Masreya (woman of Egypt), and their families comprises rites and spells from their interlinked traditions and the spirits of their shared ancestral home. Childless Esther’s preternatural power and that of her blind seer husband, Motty, confer both standing in the hara. But Esther requires Muslim Khadoujah’s spell to conceive and birth Zohar. Having no milk, she asks Delta-raised Muslim Jinane, mother of newborn Masreya, to nurse them both. Intimates since infancy, these “milk-twins” forge a passionate bond of spirit and flesh (taboo in both religions) that embodies the tie between Muslim and Jew.

Chronicling the fate of Egypt’s Jews, Joyce Zonana’s vibrant yet nuanced translation renders A Land Like You a gorgeous feast for the senses and the spirit. Early in the novel, the elderly Zohar muses, “I began this tale at the beginning. . . . But I wonder—was that truly the beginning?” Tracing Jews’ presence in Egypt back to the pyramids, he says, “Egypt is our substance. . . . Egyptian brothers, dwellers in a land of relics, what you’re left with are pyramids and a few empty synagogues. Take care of them! How can you live without us?” For if the Inquisition changed Spanish culture, so has the exodus of Jews altered Egypt’s.