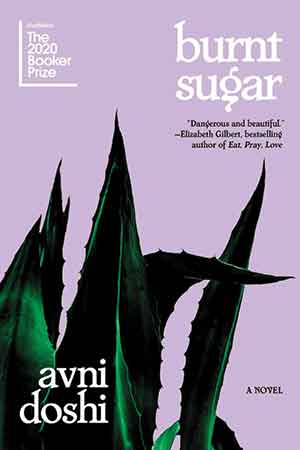 PUBLISHED AS Girl in White Cotton in India, the Dubai-based American novelist Avni Doshi’s rechristened Booker-nominated debut, Burnt Sugar, is a poison-laced love letter to motherhood. Set in Pune, India, it tells the story of an embattled duo—Antara, a struggling artist, and her mother, Tara—as they balefully circle and goad each other, putting their already-fraught relationship to the test after the latter is diagnosed with dementia. Told from the perspective of Antara, Burnt Sugar fizzes and foams with a daughter’s venom. “I would be lying if I said my mother’s misery has never given me pleasure,” boasts Antara as early as the novel’s first lines. “I suffered at her hands as a child and any pain she subsequently endured appeared to me to be a kind of redemption.”

Even before we get to the heart of Antara’s resentment, it is not difficult to imagine why she would despise her mother, a figure wrought specifically, it seems, to educate us on the rough-hewn, hurt-inducing aspects of motherhood. Tara antagonizes and humiliates Antara at every turn, both for the small and the big things. She is obdurately ungrateful for her care. Often she emerges, lucid, from the farrago that is her failing mind to contradict Antara’s assertions on their mutual past.

Advertising itself as a revenge drama—the story of a daughter caving in to her rancor and coming into full-blown spite—the novel, one quickly realizes, conceals more than it discloses. Burnt Sugar works at a staccato pace, basking in false leads, transient deferrals, and startling reveals, thriller-style. Part of what comprises Antara’s routine, aside from her obligations to her mother, her husband, Dilip, and her baby, is her work as an artist. Daily, she will “[sketch] from memory, something loose and formless, a fleeting impression, to warm [her] hand.” Guided by her whims, she will add a detail or two to her chosen object or “texture with short sharp strokes.” “I know I’m finished when I have gone too far, when the picture I started with has moved away from its original categorization into something different, when I have altered it to the point of being almost grotesque,” Antara tells us in that cool, unnerving manner of hers. This is also true of the story she tells.

As we learn more about her and her mother, of the time they spent at an ashram, of her mother’s affairs after leaving her loveless marriage, and of Antara’s own involvement with an artist named Reza, the story travels farther and farther from the elementary premise from which it started, and Antara’s declaration increasingly reads as her mea culpa: an admission of her unreliability as a narrator, the fallibility of her memories, and the distortions and blind spots concerning her own behavior vis-à-vis her mother that necessarily inform them. Tara’s own understanding of her life fills up the mangy areas of Antara’s recollections to make us see her, however fleetingly, in a different light. The novel does not redeem Tara, but neither does it obfuscate her humanity.

Self-consciously one-sided though it is, for the most part, or perhaps precisely because of that, Burnt Sugar ultimately reads like a jagged meditation on memory—one that unsettles as much as it thrills with its profound comprehension of the urges and caprices of the mind.