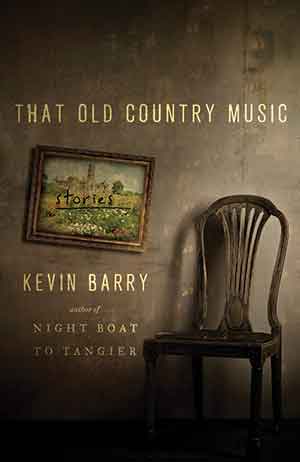 THOUGH NO GHOSTS move through its pages, Kevin Barry’s That Old Country Music is a catalog of hauntings. The characters who populate these eleven stories are bedeviled by phantoms: memories and possibilities, places they can’t forget, and people they really should. The resultant confrontations are chronicled by the Irish author with equal parts earthy relatability and offhand poeticism.

Barry introduces his collection with a quote from filmmaker Jane Campion on “the romantic impulse,” characterized as both “heroic” and “foolhardy.” Several of Barry’s stories vividly evoke this tightrope walk. “The Coast of Leitrim” finds its underachieving-aesthete protagonist easing into an affair with a like-minded Polish émigré, then almost wrecking things through nothing more than petty insecurity. In “Saint Catherine of the Fields,” a middle-aged music scholar confronts his romantic failings while transcribing a folk ballad about a woman who, with her husband’s support, enraptures and destroys an unsuspecting herdsman for “no more than a sport.” And in the titular tale, a young mother-to-be contemplates her destiny while waiting for her baby’s father, an ex-paramour of her mother’s, to return with the spoils of a petrol-station robbery.

A raw form of self-discovery marks “Deer Season,” in which a country girl with a taste for Bolaño novels harnesses “the new soft rhythm of her power” to seduce a forestry worker into taking her virginity, running him out of town in the process. Two other stories offer alternate takes on notions of absorbing identity through others. In “Old Stock,” a writer inherits a country cottage from his satyrish uncle (“Cause of death: the west of Ireland”), then gets more than he bargained for when the house’s aphrodisiac properties begin to turn him into the old libertine reincarnate. Another elder bequeaths his self to the more willing protagonist of “Roma Kid,” who wanders away from her rootless family, is rescued from injury by a trailer-dwelling pensioner, and slowly assimilates his home, his books, and his very way of being.

Barry was once something of a nomad himself, boasting seventeen addresses by his midthirties, and an ambivalence about the itinerant lifestyle shades the narrator of “Extremadura (Until Night Falls),” a cynical wanderer washed up in western Spain, and the rich-pig mother and son of “Toronto and the State of Grace,” who crash-land in the narrator’s pub to reminisce about their rancorous ramblings as they drink themselves to metaphorical and (in one case) literal death. Even legends are not immune to the traveler’s travails in “Roethke in the Bughouse,” a fictionalized chronicle of the American poet’s unexpected institutionalization during an early 1960s pilgrimage to the coastal isle of Inishbofin.

Yet no matter where we roam, our travels terminate the same way, a fact Barry examines in a pair of striking tales that grapple with the inevitability of death. The shaggy-dog-scented “Who’s-Dead McCarthy” chronicles a man whose daily bread is the incessant sharing of the details of recent passings, simply because he finds the very notion of death “impressive . . . no one has the answer to it.” And a troubled small-town police sergeant aims to answer that yawning question in “Ox Mountain Death Song,” as he stalks the terminally ill scion of a clan of ne’er-do-well murderers, a man he feels certain will otherwise become a killer himself before it’s all over. “Take one of them and spare one of us,” the sergeant tells himself, as he succumbs to the pull of his unsupported certainty and gives Barry’s collection of spirit stories one of its few authentic ghosts.