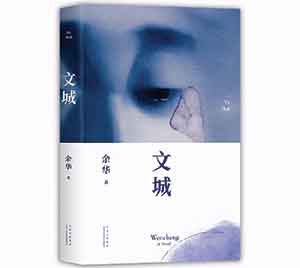 WEN CHENG IS the name of a mysterious city. It’s hard to tell the explicit implication of the name, for Wen is a word of multiple meanings. It could refer to Chinese characters, scripts, languages, literary writings, formal rituals, natural phenomena, and it could also be used as a surname. For Lin Xiangfu, Wen Cheng is the hometown of his missing wife, Xiao Mei. He comes from the north to the south, with their daughter in his arms, but finds no place of that name. Wen Cheng is a mystery, a lost city, a Utopia.

The novel is composed of two parts. The first two-thirds of the story is from the perspective of Lin Xiangfu, and the final third follows that of Xiao Mei. Both parts start with the phrase “In Xi Zhen.” Xi Zhen (Creek Town) is Wen Cheng, in concrete. Lin Xiangfu stays there for the residents speaking his wife’s tongue and wearing his wife’s clogs. He settles there, lives there, and dies there. His story ends, then Xiao Mei’s story begins. “Life is composed of one’s past and the other’s prelude,” reads the book summary. “The torrent of time pushes everyone to make their own choices. This is a savage age, with the start yet to be started, and the end yet to be ended.”

Yu Hua, one of the most popular Chinese contemporary writers, defines Wen Cheng as an unconventional romance; varying from his best-seller, the realistic To Live, and his last magical-realistic work published eight years ago, The Seventh Day. Almost all the characters, even a couple of bandits, surprisingly wear the same warm color against the gloomy social backdrop. The traditional Chinese doctrine of Confucianism is hardly mentioned in this book, but its characters behave in accordance, seemingly on instinct. The country gentlemen and stewards, young masters and hired hands, merchants and prostitutes, and all the other ordinary people struggling in the turbulent age of the late Qing Dynasty, they all shimmer unexpectedly with warmth and kindness, loyalty and humanity.

From this novel, you might get the impression that Yu Hua seems to have reverted from his earlier years of being a cynical adult and turned into an innocent child, endeavoring in rebuilding a fairy land after a catastrophe, and trying to find a satisfying answer for all problems. He does want to reach a peaceful balance in this novel, like a serious reconciliation with his old sulky self. The novel starts with a quest, and it ends with emotional closure.

A husband leaves his home in search of his wife; though he fails, providence brings their coffins together for a short moment on a beautiful sunny day. The key is that the reader knows. They know why she left and where she went and how she died. They know she loved him as he loved her, and she regretted every moment after leaving him, and she sent their daughter embroidered clothes, filled with a mother’s love. They know he died a hero, and she died thinking of him. They know everything.

Different from Brothers and To Live, where readers are tortured with unsolved questions and unpacified grief, Wen Cheng indulges and feeds its readers with everything they want. Yu Hua endeavors to draw a perfect circle in this book. And sometimes, he even goes a little further on the path of perfecting it. The first part should end when Lin Xiangfu is killed, for usually the protagonist’s perspective is over after his death, and the writer of To Live would definitely leave it there. But today’s Yu Hua just cannot leave his death unrevenged. Of course, if he could, the second part added to patch up the tragedy would not be there either, and the whole story might make another realistic novel, instead of a romance.