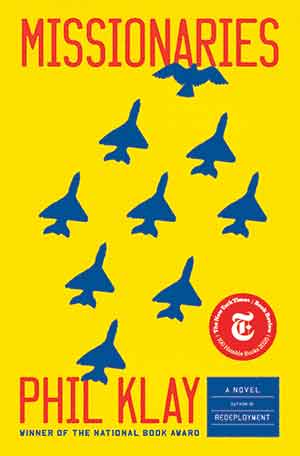 PHIL KLAY’S COLLECTION of short stories, Redeployment (2014), dealt with the Iraq War, sometimes directly, sometimes as remembered or related to civilians in the States. In either case, the stories led to questions of what really happened, whether one could get at the truth of combat, even if one didn’t want to lie. Often those most involved were taxed enough to remember their experiences clearly, without exploring the policies and tactics that put them there.

The attempt to recover immediacy continues in Missionaries, set as it is in Afghanistan, then extensively in Colombia. A journalist is drawn to stay in Colombia after she is kidnapped, precisely because she can’t understand what she went through. This novel enlarges the picture by including both frontline participants and the removed officials who order them into action. One is led to consider how engagement decisions are made. The hanging question is whether what’s called the System, the gathering and processing of actionable intelligence, really controls the humans who say “yes” or “no.” Of course, the focus on characters, carrying out or victimized by the violence, throws into question whether the System’s intelligence is accurate and, even if it is, whether enough is known about a target and the consequences that will follow its elimination.

The American journalist who was later kidnapped had asked to be sent to a war zone where “we are winning.” Colombia in the 2010s seemed to be it. American aid had built the intelligence system, the combat teams of the Colombian army had attained SEAL efficiency, the FARC rebellion was over, and the urban drug wars were a trauma of the past. But there are many “buts.” In a country so cross-hatched by mountain ranges, order and justice tend to be locally imposed. Regional militias, hardly better than the guerrillas they once fought, often rule in farmlands and villages. While the major drug lords no longer hold sway, the poppy crops are still the best moneymakers, particularly for those near the northern border. Attempt to follow the law by growing a legal crop, and you might be victimized by drifting sprays meant to eliminate the poppy fields. Attempt to become a responsible shopkeeper after years of combat, and you might be forced into the service of the local boss.

Through a shifting point of view, Klay draws the reader into the lives of victims and combatants, their commanders, students, humanitarians, government officials—American and Colombian—and outsiders. Toward the end of the novel, he shifts to a more omniscient point of view to show how these lives entangle, collide, and survivors move on. In one case, a former Colombian officer shops his talents to Yemen, using a familiar intelligence system to target new “enemies.”

While many of the characters have a sense of mission, sometimes idealized enough to be compared to missionaries, they really serve more than they control. Missionaries is a needed corrective for those who imagine that political or social movements, even governments, operate through hidden controllers who can orchestrate predictable outcomes.