A Girl Is a Body of Water by Jennifer Nansubuga Makumbi 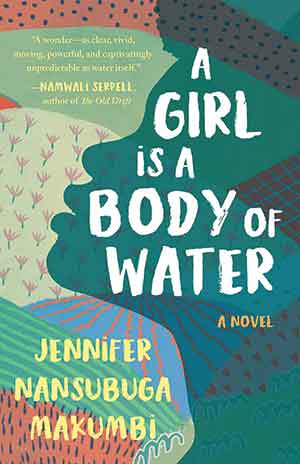 JENNIFER NANSUBUGA MAKUMBI’S second novel, A Girl Is a Body of Water, was published in the UK under the title The First Woman (Oneworld, 2020). Both titles capture the essence of the novel’s message: women have had to develop subversive resistance techniques to survive and counter shrinkage in the face of patriarchy. In the case of the former title, resistance can take the form of conforming to the shape of the container, and in the latter case, resistance takes the form of mythmaking. The novel presents two coming-of-age stories of connected women: that of Kirabo and Giibwa (during the 1970s and 1980s) and that of Alikisa and Nsuuta (during the 1930s and 1940s). The novel beings with the story of Kirabo, who matures during the reign of Idi Amin. It then moves to the colonial Uganda of her grandparents. Both stories share a fundamental question: What does it mean to fly out of the body?

Reminiscent of Audre Lorde’s “Poetry Is Not a Luxury,” storytelling is key to the lives of all the women in the novel. Told in four parts—“The Witch,” “The Bitch,” “When the Villages Were Young,” and “Why Penned Hens Peck Each Other”—it opens with Kirabo, a motherless twelve-year-old living in a rural village with her grandparents. She is convinced that she has two selves: one of which is evil and given to flying out of her body and the other a proper young girl. She consults the witch, Nsuuta, described as her grandmother’s (Alikisa) foe, to help her solve two problems. First, how can she stop her flight, and second, how can she find her mother? Thus begins a sweeping tale that encompasses fundamental issues affecting women in Ugandan society, including god-making, skin bleaching, the clan system, trafficking, polygamy, colonialism, and superstitions around women. Because stories, as Nsuuta explains to Kirabo, have great power, the ancients controlled women with the myth of their originating from and belonging to the sea—leaving the land the province of men. She adds, “Since then, women have been rootless—moved not just across places but clans, tribes, nations, even races”—and they have become migrants on the land.

Women as rootless and belonging to men are intricately connected to the friendships that develop among girls/women. Alikisa and Nsuuta are best friends in their youth, so close were they that they resolve to marry the same man so that their friendship could persist. Kirabo and Giibwa are best friends as children, but their friendship ends bitterly. The exploration of friendships among women is reminiscent of Toni Morrison’s Sula and Mariama Ba’s So Long a Letter. In each case, friendships are tested by men and patriarchal intuitions, and with that kind of pressure, can true friendships exist? The novel reveals that women can be each other’s best allies and support. They can also be each other’s bitterest enemies.

If Kirabo is a feminist, Nsuuta is the original prototype. Unlike other women in her village, Nsuuta wants to complete her education and become a nurse, like the haughty Asian nurses she encounters during her youth. She is a child of privilege, intelligence, and beauty (the scale involves her light complexion). But she is not male. Her choices while in school scandalize her rural community. When she returns to the village, she decides that rather than wait on the occasional visit of her married lover (whose clan has embraced Christianity, precluding the taking of a second wife), she takes lovers to satisfy herself.

Similarly, Kirabo’s feminism is expressed in her free will and choices. She is bound for higher education to become a veterinarian. Her confrontation with her biological mother, her sensitivity to the plight of other women (including her unpleasant stepmother), and her attempts to make amends with the best friend (Giibwa) who betrays her are signals of her disposition and choice of being in the world. But like Nsuuta, she is privileged, and that poses a problem in her relationship with Giibwa, who is the daughter of laborers. Giibwa exposes their relationship as lopsided, a class issue. She proclaims, “But for me the problem is not that a male finger rules the hand; it is the fact that the four female ones are not equal.” It is the feudal position of her family as laborers who live on Kirabo’s family’s land that disturbs her most.

To her credit, Jennifer Nansubuga Makumbi presents a diverse array of women characters in the novel to tell a sweeping story of twentieth-century life in Uganda. From the traditional woman to the woman who feigns a traditional posture to manage her husband, to the openly defiant woman, the novel champions female resistance in its myriad forms. But it is not a fairy tale about women. After Idi Amin expelled Asians from Uganda, Kirabo muses, “Uganda was that woman who bleaches just the face and imagined the rest of her body light-skinned too.”

The novel instantly invites comparisons to Tsitsi Dangarembga’s Nervous Conditions for good reason. Though different societies, the issues facing girls remain the same. It also calls to mind Jamaica Kincaid’s A Small Place. It is unmistakably evident in the reflections of Ugandan time, European time, and the wristwatch. Well executed and engaging, the novel is a spellbinding cultural excursion.