Places of Mind: A Life of Edward Said by Timothy Brennan 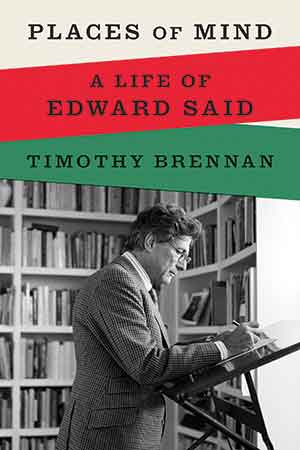 THE BIOGRAPHY OF an English professor who is known for eclectic bibliographies ignoring doctrinal lines would, ideally, draw on appropriately unique sources. In Places of Mind, Timothy Brennan, former advisee and longtime friend of Edward Said, does exactly this. Brennan, a professor of comparative literature at the University of Minnesota, consults former students, colleagues, allies, and antagonists—as well as FBI files, personal correspondence, and decades of published work—to write an unprecedented account of Said’s life.

Said taught at Columbia University from 1963 until his death in 2003. Despite his fervent political activism, which included membership on the Palestinian National Council, and engaging with both Jimmy Carter and Yasser Arafat to advance Palestinian interests, his primary object was always arts and letters. Said’s critique in Orientalism of Western depictions of the Oriental “other” remains a foundational text in postcolonial studies. His frequent media appearances, witty retorts, and enthusiasm for writing for the New York Times, Grand Street, and even House and Garden gave him the verve of the public intellectual despite his longtime university tenure. Brennan rightly places Said in the coterie of prominent postwar, left-wing intellectuals including Noam Chomsky, Hannah Arendt, and Susan Sontag, and he notes that Said “was the only one of them who taught literature for a living.”

Said was an inveterate critic. Of Beginnings, his exploration of modernism and critical theory, Brennan writes: “His point . . . was to suggest that fiction and criticism were equally foundational, and that criticism, not necessarily fiction, was where the deepest cultural recesses of society were laid bare.” If Said’s work reminds readers of the critic’s often overlooked capacity for genuine artistry, Brennan’s book reminds us how a keen biographer can make an already luminous subject radiant. Describing Said’s suspicion of the postmodernists, he writes, “He refused to follow them into that abyss, even while admiring the brio of their triumph in getting intellectuals to feel the dizziness of thought as its ground was cut from beneath their feet.” Places of the mind, Said knew, are tectonic, unstable, always subject to shifting currents beneath.

While Brennan depicts in rich detail Said’s prolific career as “the closest thing America had to Sartre,” the vulnerable, idiosyncratic human behind the professor and pundit feels buried. Whole chapters summarize Said’s major projects, but it is only two-thirds of the way into the biography that readers really encounter domestic scenes and previously unpublished personal details. Said woke up at five a.m. He made English muffins with complimentary containers of jam saved from frequent travels. Only Volvic or Evian water was suitable for the espresso machine, and only he was allowed to operate it. He adored Mont Blanc pens. He loathed fancy restaurants. For twenty years he turned down offers from Harvard. He started and abandoned a semi-autobiographical novel. When asked in London by a young Palestinian student for advice about funding his education, Said mailed him a £1,500 check. His children teased him for having elitist taste in music. Unable to cope when his son, Wadie, was hospitalized with osteomyelitis, he fled to a concert. He saw a therapist his entire adult life.

These are the delicious, humanizing details that sustain a compelling biography in part because they are not available in the subject’s own oeuvre. Brennan supplies these anecdotes in an altogether enthralling biography, but, much like reading Said, his focus on complex literary history can be exhausting. Nevertheless, Places of Mind is a masterful portrait that encourages readers to continue grappling with the complicated ideas to which Said devoted his life.