Made by Sea and Wood, in Darkness by Alexandros Plasatis 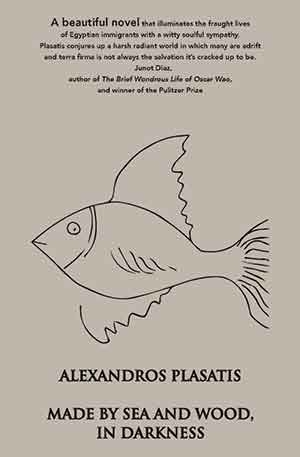 AWARD-NOMINATED author Alexandros Plasatis’s Made by Sea and Wood, in Darkness is a nostalgic “novel in stories” portrait of his hometown of Kavala, a fishing community on the northeastern coast of Greece.

The novel is mostly set in and around a seaside taverna called Café Papaya, a favorite haunt of local drunks, where its main characters work as servers. In the first two vignettes, “The Legend of Zaramarouq” and “It Was Dawn in Salonica, Too,” we are introduced to Pavlo and Angie, whose revolving encounters with the locals form the spine of the novel; Pavlo spends his time daydreaming, reminiscing about encounters with a lionized Egyptian fisherman, while Angie humors a nationalist’s advances and shares a drink with him, before witnessing his harassment of a table of foreigners that nearly causes a brawl.

While it’s not an overtly political novel, regional dynamics still manage to permeate the everyday life of the population: hegemons take every opportunity to display power through wealth or consequence. Women exist to mediate or be objectified at the whims of frequently drunk and sometimes violent men. Migrant workers, mostly fishermen, encounter both casual and systemic racism. The town beggar (ο τρελόσ του χωριού), a common trope of dehumanization in Greek society, is entertained by the comically belligerent owner of Café Papaya only to be shooed away as patrons arrive. At one point, locals tell the police that they’ll sort out a violent dispute amongst themselves, cautiously omitting an Egyptian character’s identity. At another point, in a Godardesque moment of absurdity, Pavlo appears to spontaneously microwave a handbag after obtaining it at knifepoint.

Where Made by Sea and Wood, in Darkness succeeds most is in defining a community that’s both intimate and populated by dreamers. You get the sense that you’re there with the characters, that you’ve really gotten to know them as people. However, the book can at times feel a bit like its frequent subject matter, a drunk’s tedious rambling at their captive audience. This is not a plot-driven novel. It drifts in multiple directions and is anchored only by its setting.

Some readers may find themselves left at its conclusion unsure of a point beyond the author’s own homesick recollections, though maybe that’s the point. Some may, like the character Angie, notice the impression of an unseen, harmonious world that’s further out than the novel’s horizon allows.