Dostoevsky in Love: An Intimate Life by Alex Christofi 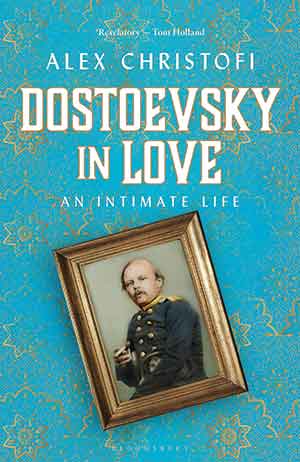 ALEX CHRISTOFI’S ENTICING literary biography, Dostoevsky in Love: An Intimate Life, takes a unique approach to the genre. He inhabits his subject, immersing himself in Fyodor Dostoevsky’s life and literature to the point that the book reads more like a novel than it does a piece of critical nonfiction.

He explains his innovative technique in an informative author’s note. Anything in quotation marks is a direct quote “reported by Dostoevsky or one of his contemporaries.” Anything in italics “written in the intimate first person and represented as the writer’s thought—might have been taken from his letters, notebooks, journalism or fiction.” The brilliant result is a captivating mélange that produces an engrossing blend of facts and feeling, putting the book on the cusp of a fictionalized memoir.

Christofi’s method is evident from the start. He begins in 1849 when he imagines Dostoevsky on the edge of execution. A letter to his brother Mikhail details being “taken with five others to the Semyonovsky Parade Ground” after “eight months of solitary confinement.” Waiting for his appointment with death before a firing squad, he considers the “certainty of it” when in “half a minute your soul must quit your body and you will no longer be a man.” A sudden reprieve from His Imperial Majesty makes him reflect on the “purpose of life,” seeing it as a “gift, life is happiness.” It is a prominent theme that will repeat itself in his personal behavior and his fiction.

There is an immediate shift to the past (from 1821 to 1845) into a chronological progression that traces Dostoevsky’s birth and childhood. His early years are marked by trauma (when, at nine, he thinks he is being pursued by a wolf in the woods), disaster (when his family estate burns down), and grief (when he is fifteen and his mother dies from tuberculosis). These become transformative events for the “poet in engineer’s clothing” so that by age twenty-four and the publication of Poor Folk, the critic Vissarion Belinsky declares that he had shown everyone the “terrible truth” of life, “pinpointed the whole tragedy of [his] characters so vividly, through such significant little moments” that he had written “precisely the sort of social novel that Russian literature had been crying out for.” In fact, he had already begun to envision his “great archetypes . . . the drunken man, the dissolute man, the man marked for death.”

He might just as well have been describing himself. His entire life was punctuated with illnesses and addictions. He suffered from debilitating epileptic attacks (including a devastating one on his first wedding night), was beleaguered by hemorrhoids and emphysema (treated under a bell with compressed air), alcoholism, and gambling.

He sought solace and consolation in literature and love. From 1857 until his death in 1881, three women (he married two) drove his romantic inclinations. In each case they were considerably younger than him. They were also often married when he began the relationships. At thirty-five, an army private in Siberia, he meets his “first true love,” twenty-eight-year-old Maria Isaeva, married with a seven-year-old son. Even after her drunkard husband dies, she declines Dostoevsky’s marriage proposal because “she could not marry a private.” She finally relents when he’s commissioned as a second lieutenant. Their marriage, in 1857, never recovers from the first-night seizure, which “scared my wife to death and filled me with sadness and depression.” It was a “miserable time for Fyodor, having finally grasped what he had been chasing for three years, only to find that he wasn’t happy.” He begins to believe that “[e]verything is purified by suffering.” And so he endures suffering through the marriage until Maria dies from consumption in 1864.

Ever the serial proposer, he meets his second love (whom he never marries) at age forty. Appollinaria (“Polina”) Suslova was twenty-one when she submitted a short story that was the “perfect expression of the nascent women’s movement” to the literary journal Time, which he and his brother co-founded to “bridge the gap between the common people and the educated classes.” He fantasizes Polina as a character out of The Brothers Karamazov—“very, very good looking, with that Russian beauty so passionately loved by many men.” She, “[p]roud and ambitious . . . cultivated the friendship of the great novelist.” It was not a love to last. She quickly takes up with a young Spaniard in Paris, where Fyodor is supposed to meet her but along the way gambles relentlessly in a Wiesbaden casino, his losses greater than his gains. On the “verge of despair,” he sees the whole experience as “wonderful material for a story.” Falling into a “giddy rush of unsatisfied lust and gambling,” he leaves Polina in Berlin.

He meets his last love, twenty-one-year-old Anna Snitkina as he did Polina, when she submitted a short story. Also like Polina, she at first refuses his proposal but then marries him in 1867 and becomes his lifelong stenographer. The marriage survives the gambling addiction even when he pawns his watch and their wedding rings to avoid escalating debts.

For the next twenty years, Fyodor’s primary focus was developing his writing. His creative trajectory culminates with his magnum opus, The Brothers Karamazov. Despite his success, he sums up his life as a “succession of curses” and deems it “onerous to be a writer.” He recounts his “undeniably eventful life” for Anna, his “dismal, lonely youth . . . the cruel mockery of the literary circle . . . hard labour in Siberia; an unhappy, childless marriage.” It is clear that his one true love was always literature.

Christofi’s lucid style and inspired framework make Dostoevsky in Love: An Intimate Life a daunting accomplishment and an exhilarating read.