Pre-Eternity of the World by Christopher Buckley 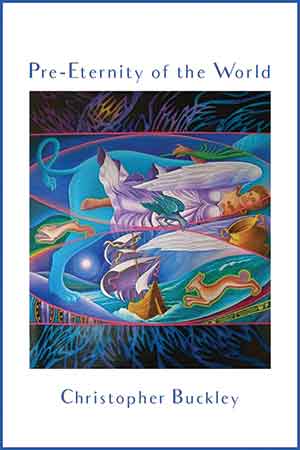 IN THIS NEWEST COLLECTION, Christopher Buckley’s twenty-sixth, you might expect to see some evidence of decline, overwriting, or dilution of content; none of that is the case. Instead, we encounter Buckley’s imaginative power manifested in a fully matured style, a style characterized by complete naturalness of voice and a seemingly effortless mastery of craft. The title poem of this collection sets the standard for the book, a twelve-page poem that muses about quasars, Einstein, Spinoza, mitochondrial DNA, surfboards hauled on dented Bel Airs in the 1950s, loneliness, religion, koi, clouds, quarks, and many other things pulled into the vortex of a far-ranging mind considering the sum total of its experience and existential moment.

The associative technique employed in these poems does not result in the dazzling showmanship of poems by, say, Albert Goldbarth, which of course afford their own type of pleasure; instead, the effect is one of a deepening intimacy in a relaxed but earnest solitude, as if the reader were sitting next to the author somewhere by the sea and listening quietly. This mesmerizing atmospheric quality of Buckley’s poems is one of the great pleasures of reading them. At their most essential, whatever these poems may ostensibly be about, they are about a feeling, a certain disposition toward experience, an uneasy repose pulled by nostalgia as well as by the outer edge of knowledge and beyond that.

One of the other great pleasures of reading these poems is their original figurative language. Similes and metaphors are never dispensable ornaments hung on the narrative tree of the poem; they are always woven as part of the poem’s fabric, often the main points on which the poem turns in its associative movement. In the early portion of “Remorse,” we read: “Brown shoes beaten / into submission, blind / witnesses to everything— / a yellowed rind of light / in the inner lining / of my tattered coat— / there, just above the heart, / where the ash of stars / has been collecting / since I was 29. // Bits of sun / like old wishes, like bruised / gardenias in a bowl, filter / through the paralytic trees— / the white glare / off the sea speaking / in the syllogisms of salt.”

For all the heady mention of cosmology and Western philosophy, these poems proceed by feeling, feeling that seeks and finds form for itself, often in original figurative language. Examples are everywhere throughout the book, but the ending of “Evening Song—on a late birthday” serves as a good example of this as well as of a rare moment of peace, almost: “I’ve done my work / and this late in the day I leave / all uneasiness to the sea— / the dark sea, indifferent as always— / from which I nonetheless accept / every breath I take today / from an on-shore breeze—here / where I am almost happy, adrift / in the frail boat of my heart.”

These poems also include an ongoing consideration of religion. In an earlier work, Buckley describes himself as a “spiritual non-believer.” It’s hard to say if that has changed. He certainly still has no time for “believers” reified in their own certainty; in the title poem, we encounter this attitude early: “and God-botherers / of every stripe, / with unquestioning convictions about the landscape / of the invisible.” Yet, in these new poems, he does not seem ready to completely deny “the other side,” though he considers it unlikely. In the final lines of the title poem, we read: “I can see there’s no guarantee / that anyone survives these dark waters, / is likely to get out of here alive . . . / all I know is that we go on / standing here / holding on to the rope-end of hope.” It seems that the poet has moved from “nonbeliever” to agnostic tilting to nonbelief, yet the insistence with which these poems interrogate the unseen and the question of God suggests an undercurrent of desire for things to be otherwise. Readers will likely enjoy these poems not for their answers but for their intellectual and emotional honesty in the movement of mind.