Among the Lost by Emiliano Monge 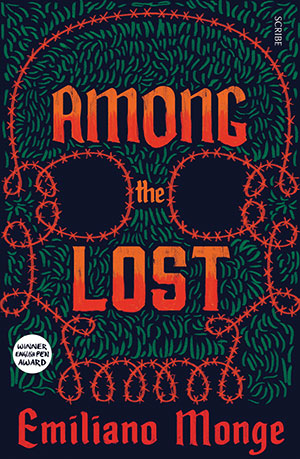 In a note at the beginning of Among the Lost, Emiliano Monge thanks the human rights organizations that provided him with inspiration. Throughout the novel, the Mexican writer quotes from the real-life testimony of Central American migrants who encountered numerous hardships on their northward journeys. We learn about the cruelty they’ve endured and their fears that they would perish alone. Monge, though, focuses not on the migrants but on human traffickers who profit from their misfortune. His main characters, abused as children and damaged by privation and drug use, are violent criminals; he wants us to understand that the suffering associated with the migrant trail goes deeper than we might think. This is a terrifying book, one that never stops confronting its readers.

Monge’s protagonists are the aptly named Epitafio and Estela (“Epitaph” and “Gravestone” in English, according to translator Frank Wynne). They grew up together in a Mexican orphanage run by a wayward priest who controls his region’s black-market economy. Now, as adults, they carry out atrocities at his behest, preying on Hondurans, Guatemalans, and Salvadorans who’ve left their home countries in search of peace and opportunity.

Epitafio and Estela assure the migrants that the fees they pay will guarantee them safe passage. Instead, the heavily armed traffickers drive them to the countryside, where they’re sold, raped, abandoned, or murdered. The migrants’ hellish plight has an explicit literary antecedent. Monge modeled his book on Dante’s Inferno, which he quotes often. Sentences that begin in Monge’s voice sometimes end in italicized passages borrowed from the Italian poet. An example comes when Monge writes of “the nameless who have crossed the border and who have not yet silenced their quivering tongues or their dislocated throats.”

Though his lead characters are odious, Monge does the hard work of imagining their complex backstories, trying to understand what might make someone behave as they do. He starts with their youth. As children, Epitafio and Estela were branded, their tattoos marking them as cogs in the priest’s shameful cabal. After years of abuse, they’ve taken to their work with enthusiasm. Fueled by cocaine, they torment the migrants, forcing them to forget “who they are, who anyone is,” Epitafio says.

If Monge’s goal is to challenge our complacency, his book is a tremendous success. Among the Lost is a horrifying indictment of those who benefit from others’ misery—and those who look the other way. But not all of his storytelling choices are beneficial.

Take, for example, Monge’s decision to assign relatively limited roles to the novel’s only sympathetic characters. We never learn the migrants’ names—a handful get customized pronouns like “ShewhostillcallsonGod” and “Hewhostillhasabody”—and the structure of the book deprives them of unique identities. Drawing from statements migrants have given to aid organizations, Monge intersperses his narrative with unattributed blocks of text in which they describe lives shaped by vulnerability and terror. “They evicted me from my home,” one says. “They slaughtered my family.” This is powerful material, but readers who want to know more about this person will find themselves frustrated.

A year after the English-language publication of The Arid Sky, another Monge-penned tale of despair set in Mexico, it’s clear that he’s a skillful writer with a distinct worldview. The violence in his books is a harrowing reflection of real-world circumstances, and Among the Lost features more than a few unnerving scenes. If only he’d found a way to focus with a bit more clarity on those in his story who suffer the most.