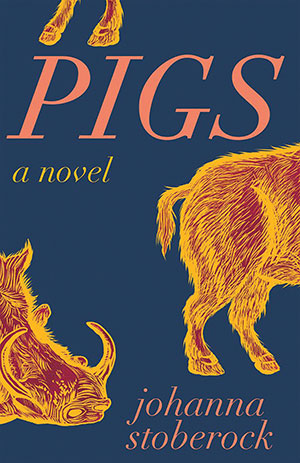 The island, from a distance, looks like almost anything other than what it actually is: a place where the world’s detritus washes up, a place where a handful of children oversee six pigs that live in a pen and consume an endless stream of garbage. The adults, aloof, smoke cigarettes, throw soirees, drink espresso, and traipse the rocky terrain in impractical yet glamorous shoes.

Johanna Stoberock’s Pigs comes in the wake of an increase in climate fiction, or cli-fi, where the Anthropocene and humanity’s relationship to a changing climate are dramatized. While the climate is not necessarily dramatized, the environment in Pigs can certainly be menacing. The ocean, as the children experience, changes its mood. It will suddenly burn, leaving welts and scars. One has to suspect the ocean’s hostile demeanor is a possible response to chemical waste and garbage infecting the water, but it might also be a reflection of the children’s relationship to their environment, a work of imagination and psychology.

Or fantasy. Stoberock isn’t clear. The children are harmed. The irresponsible adults, rendered grotesque by Stoberock, do nothing. Yet it is the world’s garbage, rather than the natural environment, that relentlessly encroaches. Pigs strays from a strict cli-fi categorization. Instead, the book takes on a mystical quality with elements of fable, allegory, and fantasy. Comparisons to the work of postmodern fabulist Italo Calvino are well placed.

While the narrative is clear in its critique of systemic modern excess and the burden placed on future generations, Pigs is rarely didactic and never condescending. Stoberock’s straightforward prose is filled with energy that advances the linear plot. With its sincere, omniscient narrator, the reader is privy to the children’s distinct thought processes, their search for memories from before their life of feeding trash to pigs, and their dreams of escape from the island and, worse, its cruel and careless adults. Pigs is effective and engaging; the reader wants, more than anything, the children to find freedom and escape. While Stoberock explores themes of nostalgia, innocence, and of returning home, we come to understand the potential impossibility of that return. The possibility of nowhere to turn.

Although the majority of Pigs is told linearly, the children’s tale is interjected with short, fragmentary chapters where the narrator considers how the island looks from a distance from various points of view. “Always,” the narrator muses, “from a distance, the island was far away. Always, it was just out of focus.” Using repetitious phrasing, these fragmented chapters build in intensity. Moreover, they reveal how Stoberock plays with perspective. Pigs explores themes of distance, sight, and blindness to address the myriad viewpoints toward our world’s excessive consumption and the personal responsibility individuals bear for the often-unwitnessed effects of our subsequent waste: “It was official policy never to look back. It was official policy to believe the world stopped once it could no longer be seen.”

Pigs manages to offer a varied reading experience, at times incredibly moving, disheartening, disturbing, violent, and playful. In the face of overwhelming trash, pigs dance. The garbage—which consists of everything from old toasters and the First Amendment to a grandmother who mistakenly cooked lasagna for her son’s gluten-free family—will never disappear. The pigs might. Stoberock forces us to consider whether or not solving the overwhelming consequences of our mass consumerism is possible. Pigs seems to suggest that the only possibility is one of fantasy.