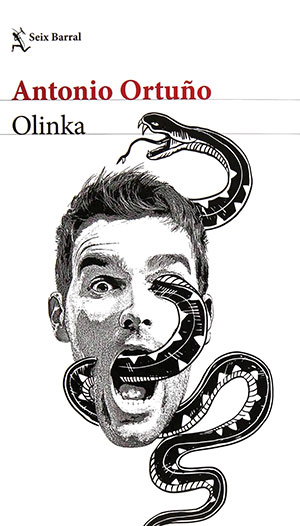 In 2015 the Independent reported that the United States Treasury Department had sanctioned more businesses for money laundering in Guadalajara—our southern neighbor’s second-largest city—than any other place in Mexico. More recently (in July 2018), Andrés Manuel López Obrador won the Mexican presidency in a landslide victory after having waged a campaign in which anticorruption measures served as a centerpiece of his agenda. It is in this context that Antonio Ortuño (b. 1976, Guadalajara) has published Olinka, a short novel dealing with Mexico’s runaway housing market, families torn apart by crime, and the human face of large-scale corruption. Ortuño’s narrative, rife with rapid-fire dialogue and fascinating psychological meanderings, has already garnered favorable reviews in the LA Times (Spanish edition), Mexico’s Aristegui Noticias, and Spain’s El País.

Olinka opens when the protagonist, Aurelio Blanco, has to pick up the pieces of his life after spending fifteen years in prison. Naturally, “Blanco” could be read as the most commonplace of last names (White), even though other translations—namely, “target” or even “empty”—seem more telling, especially since Aurelio feels broken and believes himself to be a marked man. Having worked as an accountant, Blanco’s time behind bars comes after being the fall guy for one of Guadalajara’s patriarchal engineers, Carlos Flores, who has built an unsuccessful and unfinished luxury housing complex. This boondoggle of a project had been ambitiously christened “Olinka,” the name of the proposed utopian community originally dreamt up by Gerardo Murillo, the real-life artist who found fame in twentieth-century Mexico during the heyday of national consolidation. Furthermore, it is intimated that Flores’s and Blanco’s failed Olinka has been funded by crooked investors from Mexico’s northern states, a shadowy allusion to the specter of drug money, constant in the collective political consciousness of Mexico.

All told, the text is haunted by the ghosts of Mexico’s monumental twentieth century even as the nation’s present-day political realities are rendered painfully personal—especially for Blanco, who returns to a wife who doesn’t love him and a daughter who doesn’t know him.

Ortuño provides remarkable insight into the strained internal lives of these characters via an omniscient and curious narrator; Ortuño’s prose reveals how much emotional damage can be inflicted by crime and corruption. The novel invites us to ponder the relationship between our built environments, nationalism, and family ties. Against a booming housing market, buoyed by neoliberalism, fudged finances, and disappeared people, how is the sense of family life diminished?