Learning from the Germans: Race and the Memory of Evil by Susan Neiman 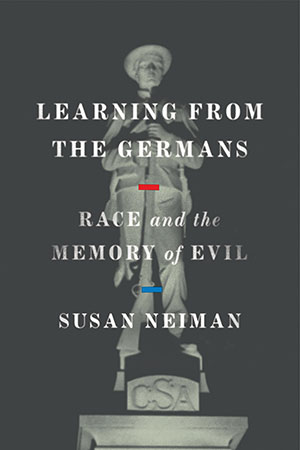 Immensely timely, this major work feels hot off the press. The Charleston massacre in 2015 initiated a debate about southern monuments celebrating its Confederate history. Susan Neiman, an American philosopher and director of the Einstein Forum, asks how this discourse might benefit from a comparison with how East and West Germany gradually initiated the Vergangenheitsaufarbeitung regarding the Third Reich and its genocide against many ethnicities and groups in Europe, the Jewish people first among them. Evil has been a lasting concern for Neiman; in Evil in Modern Thought (2002), she reinstated the philosophical question of evil to primacy of status.

Monuments, Neiman suggests, obscure the contingency of history: once put up, they appear to have been around forever. For this reason, Germany holds a deceptively iconic status for its historical sensitivity and honesty, and Neiman severely criticizes West Germany in particular for decades of denying the reality of its situation. Monuments also serve as an assertion of power and morality. The profound problem Neiman addresses, then, is the psychological difficulty of reconciling defeat with guilt—particularly through the nebulous experience of living under occupation.

While for a white southerner the removal of Confederate statues might imply a Lost Cause narrative of northern aggression, for a black southerner their persistence can suggest that men who “fought for the right to own other human beings” are honored—yet Neiman makes clear that in this case only the black experience is universal. In this, Neiman takes on the difficult aesthetics and curation of historical representation. A German who hails from a Nazi family can redeem herself to an extent, for instance by writing a candid book—as a white southerner could about their family’s involvement in lynchings—but only at the expense of the name and reputation of those family members who did not write such a book.

As often as Neiman’s interviewees speak eloquently on behalf of the persecuted, they are shining examples of historical awareness on the side of the perpetrators. The worry that this could give rise to is that Neiman risks the conditions of discernment around historical culpability and redemption on the very experiences that open these up for her: does historical awareness make women pretty and charming, men handsome and tall, and even their houses tasteful—as they are presented here? Is confession adequate to the exemption or redemption of collective responsibility? Neiman, however, turns this aesthetic pitfall to her own advantage by laying bare her own prejudices and learning from them, as when she witnesses a group of high school students reenact the trial against Emmett Till’s murderers. Not up to Neiman’s standards, at first, until she grasps that the refinement of the performance is not the issue.

Ultimately, Neiman thinks in strategic, not therapeutic, terms. The voices from which Neiman learns the most recommend making reparations and smashing fascism—the interview with James Meredith is a standout moment. This means that there may not be a cure for fascism, but the defense of society obligates us to question the history and morality of our cities, universities, museums, and monuments.