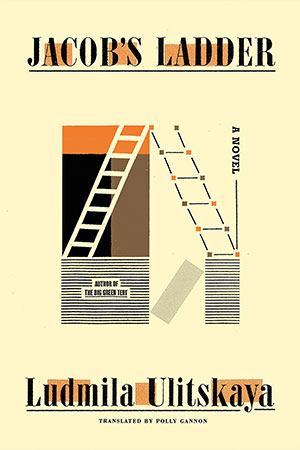 Jacob’s Ladder is an ambitious family saga that encompasses six generations and alternates between two plotlines. The book describes the life of Nora Ossetsky, a set designer, theatrical director, and writer in late-Soviet and post-Soviet Moscow, and it tells the story of her grandparents, Marusya Kerns and Jacob Ossetsky, in the revolutionary and Stalinist periods. Like Pasternak’s Doctor Zhivago, Ludmila Ulitskaya’s novel encourages us to consider how the trauma and ruptured relations experienced by one generation as the result of revolution, cycles of arrests, and war can also shape the lives of their descendants. What is remembered and what is buried in silence? Does the past ever truly disappear? What happens when children stumble upon documents that reveal the sometimes-uncomfortable secrets of their parents and grandparents?

Jacob’s Ladder was inspired by Ulitskaya’s own family history. In 2011 Ulitskaya discovered a cache of letters, journals, and other papers belonging to her deceased grandfather, Iakov (Jacob) Samoilovich Ulitsky, a noted economist, demographer, and music aficionado, who survived multiple terms in labor camps and internal exile as a result of political charges. She had met him only once as a child of eleven. Fragments of these family documents and also material from Ulitsky’s KGB file are interpolated into the novel, where they appear as belonging to Jacob Ossetsky. Ossetsky’s life corresponds closely to Ulitsky’s well-known biography.

Although Jacob’s Ladder is clearly an intensely personal novel, it is also a book that captures the larger rhythms of Russian history. Memorable turning points such as the death of Stalin and the collapse of the Soviet Union figure in the plot. Real historical figures, including the great actor Solomon Mikhoels, the artist Alexander Tishler, and Ivy Litvinov, the wife of the Soviet commissar of international relations, people its pages. We are immersed in the details of Soviet life in very specific periods and see well-loved private libraries, communal apartments, and the registration bureaus where wives of enemies of the people could request immediate divorces in the purge years.

Jacob’s Ladder is also very much a novel about the disappearance of eastern Europe’s Jews as a result of early twentieth-century pogroms, the Holocaust, the anti-Jewish purges of Stalin’s last years, and emigration. In a scene late in the novel, Nora attends a play based on the story of Sholem Aleichem’s Tevye the Milkman along with her mentor. The older woman is appalled by the “saccharine and mendacious” production that seems so at odds with the real fate of the Jewish people and tells Nora: “I have nothing against Sholem Aleichem, but we need to retire Anatevka to the museum; things have moved far beyond that. Not to mention that it no longer exists, and never will again.” When Nora is hired to stage a production of Fiddler on the Roof, which is based on the same Aleichem stories, she finds a dramatic resolution for this issue. In the final scene, she has a ladder descend to the stage, up which the Jewish characters climb, leaving darkness and emptiness in their wake. As explicated in the novel, this staging reads at once as a reference to the biblical patriarch’s dream of a heavenly staircase and God’s promise to bless the Jewish people and to give them the land of Israel as well as an allusion to the historical destruction of Europe’s Jews. “The most important thing for us,” Nora tells the play’s director, “is that the Lord God bless[ed] all peoples through the Jews, each and every person. And if the Jews are hounded out of this world, it is not certain whether the blessing will be preserved.”

Jacob Ossetsky suffers in Ulitskaya’s novel in part for his Jewishness. His plotline begins in Kiev in 1905, the year of the infamous pogrom; he loses family members to the Holocaust; he works for the Jewish Anti-fascist Committee after World War II and is arrested for the final time in the purge of this organization. Like Vasily Grossman’s Life and Fate, Jacob’s Ladder reminds us that the horrors of Stalinism and Nazism resulted from similarly depraved values and often affected the same populations. This humane novel will interest anyone with a love of history and thoughtful family sagas. It is a brilliant achievement by one of Russia’s greatest writers.