Zucked: Waking Up to the Facebook Catastrophe by Roger McNamee 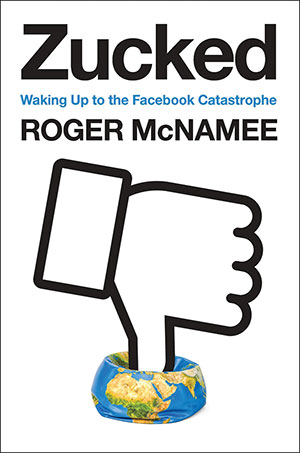 Why do we permit companies like Facebook and Google to gather behavioral data on minors? Why do we allow Google to scan our emails, including emails sent to us from people that are not linked to Google? And why do we let the large media companies of the twenty-first century get away with tailoring our online experience around the triggering and amplification of addictive patterns and largely negative emotional responses, which maximize our time spent on their platforms?

It has taken too long for questions regarding the societal impact of social-media platform business models to be voiced and then heard. One voice currently amplifying the much-needed criticism is that of Roger McNamee.

McNamee had been a Silicon Valley tech investor for almost three decades and a tech optimist for even longer when he was asked to advise a twenty-two-year-old Mark Zuckerberg on a billion-dollar bid for his then-two-year-old company, Facebook. Over the three years that ensued, Zuckerberg chose to follow McNamee’s advice on several questions. Among other things, this resulted in Zuckerberg keeping control of his company as well as hiring Sheryl Sandberg as COO, which ended McNamee’s own advisory role with the young CEO.

The role that McNamee played in the genesis of today’s Facebook imbued him with a sense of obligation to lay open and speak out against the effects of the business model the company adopted after Sandberg joined its ranks. The same model also drives Instagram and WhatsApp (both owned by Facebook) as well as Google (which also owns YouTube), LinkedIn, and, to a lesser degree, Amazon. In Zucked, Waking Up to the Facebook Catastrophe, McNamee collectively refers to these players as “platforms,” and whereas many of its anecdotes do center around Facebook, the core of its argument applies more widely to all of them.

Published earlier this year, Zucked is one of McNamee’s latest additions in a wealth of efforts to interrogate and revolutionize the status quo. At its heart lies his thesis that the advertisement-based business model of the large platforms, which aim to modify user behavior, has been and continues to be an increasing threat to privacy, public health, democracy, and innovation. McNamee sees this business model and its related design choices as the critical elements in the platforms’ considerable potential for harm, since the more data they can collect on us, the better their algorithms are able to predict and manipulate our online behavior.

McNamee’s “concerns had been building throughout 2016 and reached a peak with the news that the Russians were attempting to interfere in the presidential election.” He reached out to Zuckerberg and Sandberg with a two-page memo detailing his concerns and listing instances where Facebook was causing harm. The answer was swift and polite but treated McNamee’s letter as a PR problem rather than seriously addressing his concerns. Instead of further trying to appeal to Zuckerberg and Sandberg, McNamee teamed up with like-minded individuals like Tristan Harris of the Center for Humane Technology and Renée DiResta of New Knowledge to prompt public and political action, which contributed to Zuckerberg testifying at two congressional hearings in April 2018.

What McNamee is calling for is a regulatory-body “equivalent of the Food and Drug Administration (fda) for technology” that ensures technology is once again deployed to serve humans, not vice versa. The concrete regulations he envisages reach from requiring third- party audits of algorithms, to making “a filter bubble-free view of Facebook News Feed and Google search results” mandatory, to granting users ownership and absolute control over their data including the ability to migrate data to other companies, which would significantly facilitate the entry of start-ups.

Zucked is not a scientific study but the account of one person who came to worry about the impact of a company whose founder he once advised. This comes both with its advantages and shortcomings. Many arguments—on addictive behavior and mental health impacts, for example—the reader will likely be willing to follow. After all, don’t most of us feel like we are wasting too much time scrolling through the social-media platform of our choice? Yet intuition and personal experience do not necessarily extrapolate to the wider population. McNamee somewhat concedes this point and lists a wealth of material to complement his own. One book that is not included in this list is The Age of Surveillance Capitalism, by Shoshana Zuboff, which was published only a week before Zucked. At nearly seven hundred pages in length, Zuboff’s book adds important depth to the argument that both are making, and, since its publication, McNamee himself has thrown considerable praise its way.

Zuckerberg himself may not see the same need for regulation as many of his critics do, but today even he senses that there is something wrong with the power his company wields: “Lawmakers often tell me we have too much power over speech, and frankly I agree.”