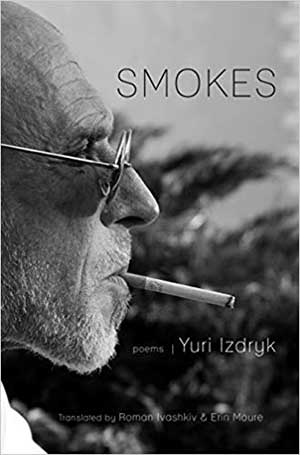 This useful translation of poems, culled from six books by renowned Ukrainian author Yuri Izdryk, makes the most of the facing-page translation format by allowing alphabets to drift across the center line, playfully mixing Cyrillic and Latin scripts in a way that both reduces and reinforces the distance between Ukrainian and English and thus between the poet and the anglophone reader. Such playfulness is appropriate in a translation of a poet so given to wordplay and pop culture allusions. While Roman Ivashkiv and Erin Moure don’t always reproduce the tight rhyming that connects Izdryk both to traditional poetry and to hip-hop culture in a way that may remind American readers of Michael Robbins, they do convey the poet’s tendency to run amok through etymology in lines like “a pandemic of anxiety and panic as panacea” from the poem “Panpipe.”

A deep restlessness as well as an intense privacy underlie the poet’s wordplay, both manifested in a refusal to let language settle into any clear and straightforward sense. Izdryk seems to be constantly seeking something or someone and constantly avoiding being found himself. In “Zoom,” the speaker says, “this house sits above thermal waters / where green is the grass on the rocks forever / there are no roads and no trails reach it,” one of many moments in which the poet situates the voice of the poem in an unreachable house or room, as if he is speaking to us but also reminding us that we cannot speak back. Interestingly, this dynamic is reversed as in a mirror when the poet often speaks to a God he is more than half certain is his own invention. In “Panpipe,” he writes, “reveal yourself speak your name show where you are / why can’t you hang loose about your creation.” In a poem called “Prayer,” it is not entirely clear, despite the poem’s title, if he is speaking to God or to a lover when he says, “when the world turns its back / and distances and walls rise between us / talk to me,” but as that last line gets repeated throughout the poem, the reader begins to hear a kind of desperation in the plea.

Through slippery language and shifting imagery, Izdryk avoids being pinned down, but rather than coming off as distant and cold, this elusiveness makes the poetry seem all the more human, all the more relatable in its anxieties.