Children of the Ghetto: My Name Is Adam by Elias Khoury 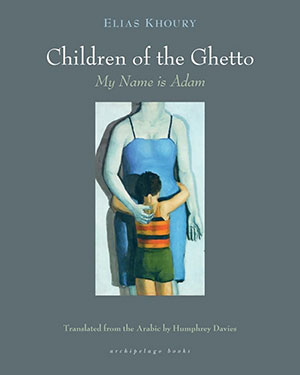 Adam Dannoun, a melancholic Palestinian self-exiled in New York and the protagonist-narrator of Children of the Ghetto, suffers from literary issues. “I’m not based on any model,” Dannoun insists in his notebook. “My story sums up nothing but itself, and I don’t want to be a symbol.” Nevertheless, the story of his life as he recounts it is a patchwork of allusions to canonical works by Palestinian and Israeli writers, and his death restages that of exiled Palestinian poet Rashid Hussein, who fell asleep with a burning cigarette in his New York apartment in 1977.

While Dannoun is a literary-insider joke, he is also a complex narrator trying to confront his past. This is not the first time Lebanese novelist Elias Khoury tackles the “Palestinian story” as a narrative problem. His epic Gate of the Sun (also translated by Humphrey Davies) collected countless stories of the Palestinian Nakba —the defeat and expulsion of Palestine’s inhabitants with the establishment of Israel in 1948—demonstrating the collective force of storytelling and oral history. In My Name Is Adam, the first title from the trilogy Children of the Ghetto, Khoury explores a similar constellation linking historical trauma, silenced memory, and narrative form—yet this novel’s stance on the possibilities and ethics of narrative is much darker.

The notebooks that make up this novel, Khoury tells us, were saved from the fire that killed Adam Dannoun: these are his notes for two novels, never completed, which Khoury presents in unedited form. The first, which suggests that Dannoun would not have made a great writer, is an attempt to write the forgotten story of a minor Abbasid-era poet as an allegory for the silenced history of Palestine—a tribute to the victims who went to their deaths in silence. When Dannoun gives up on this novel, it is because he is determined to emerge from silence and to write his own story: the story of the Lydda Ghetto, the small Palestinian enclave that was fenced off after the majority of Lydda’s residents were massacred or driven to exile in 1948, and the story of his effaced identity as an Israeli Palestinian.

The found-notebooks conceit is often frustrating, making us witness a masterly writer like Khoury meticulously undoing his skill. These notes for a novel mostly contain the things that novelists leave out—the minutely modified repetitions in search of the right emphasis, the writer’s descriptions of what he is and is not trying to do—and Davies’s translation faithfully delivers the clunkiness of the original, conveying Dannoun’s reluctances. These are the scaffolds of a novel, which should fall away when the finished structure is standing. For Khoury, however, these scaffolds are the story itself. The text takes the reader through the arduous process of emergence from a natural state of silence into narration and narrative. This is not (only) a narrative of Palestine but an exploration of the inability and unwillingness to speak, of the social, political, and psychological conditions that have so often made the story of the Nakba impossible.

Regarding his own writing, Dannoun is incessantly conflicted: on one hand, he recognizes how literature can tell the stories that are left out of the officially sanctioned archives and that their abstractions capture a different kind of truth. On the other, he hates how stories force chaotic events into forms, stripping away singularity. Literature makes everything exactly what it is as well as a symbol of something else. This emerges most painfully in the entanglements of the modern Jewish and Palestinian narratives, not only historically but also in recurring figures and tropes. The Lydda Ghetto, after all, was so nicknamed by the Israeli soldiers, who came from the Jewish ghetto in Warsaw. And the story of the Palestinian tragedy is often eclipsed by the Holocaust.

Can the story of Palestine be told on its own? Khoury insists that it is impossible to separate the stories of Palestinian and Jewish victimization, but his efforts to accompany the silence of the victims with their stories provide a generous and expansive terrain to think of histories of violence, of their remnants in the present, and of the complexities of survival.