The Bullet Train and Other Loaded Poems by RaSh 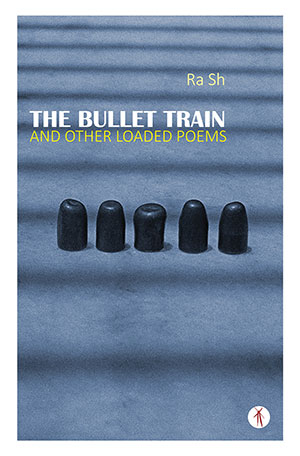 RaSh’s fascinating collection of poems draws immediate attention to its title. One only needs to turn over and read the first poem to understand the politics behind it. He uses the image of the bullet train as a symbol to juxtapose two uncomfortable truths together—India’s ambitious project of building a bullet train and the state-sanctioned killings of Indian rationalists and journalists like M. M. Kalburgi and Gauri Lankesh. The idea behind the title and the title poem is to bring to the fore the jarring reality of the parallelism between commercial ambition and human sacrifice. As the poet himself writes: “This train will now pass through / Under skin arteries and veins and nerves. . . / To topple into a depthless soul one by one.”

Unlike RaSh’s previous collection of poems, Bullet Train is directly political and addresses issues that have been bothering not just the poet’s conscience but the collective conscience of many in India. In trying to create poetry out of violence, RaSh tries to break free from the stereotypical assumptions about the poet and his/her Muse. The Muse here is far from the Greek imaginary. The Muse is Asifa, a young girl repeatedly raped inside a temple and later killed as an act of vengeance on her community. The Muse is also Rohith Vemula, a young PhD scholar who, after systematic bullying by his university for being a Dalit, succumbs to suicide (see Meena Alexander’s “Death of a Young Dalit,” WLT, Nov. 2016). As historical testimonies vehemently resisting amnesia, the poems hurl a challenge to the status quo: “You can teach me / How to burn alive a peacock . . . / But, never never never never teach me / How to love . . . / You don’t know / What I know.”

RaSh’s language jolts the reader out of her indifference. Lines like “her lover bought her womb and filled it with ink to dip a quill in” transform the reader into an active listener. This is what distinguishes RaSh’s collection. Surpassing ordinary readerly expectations, these poems explode into stories of “lies, conceit, loathing, and repulsion.”

The poet-witness, like his Kafka, wails for the dead and the dying at the hands of the oppressor: “Who is he to die so unceremoniously? / ‘Like a dog,’ ‘like a dog’ . . .”