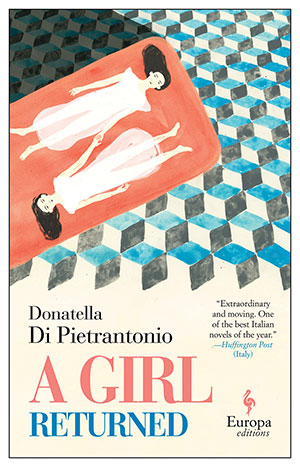 In Ann Goldstein’s wonderful translation of Donatella Di Pietrantonio’s The Girl Returned, the first image we have of the protagonist is of her standing in a doorway, suitcase in hand, waiting to be invited into the apartment of her biological family, a family she had no idea existed until recently. The scene is not only significant to the novel, it is highly symbolic of the plight of women writers who have historically struggled to gain the same recognition as their male counterparts. The theme that sets the novel’s universe spinning is abandonment. In the mind of a lesser novelist, it would be easy to linger on and exhaust this subject, but in Di Pietrantonio’s world, abandonment is turned into resilience. And despite its mostly dark subject matter, the novel has an undercurrent of fortitude and hope that makes it one of the most profound books of the year.

The protagonist is a thirteen-year-old girl who, without being told why, discovers that the couple she thought of as her parents are not when she is sent away to live with her biological parents. Arriving at the rundown apartment in a completely different neighborhood, she finds a world mired in poverty and abuse but not wholly without love and compassion.

She discovers that she has brothers as well as a younger sister, with whom she is forced to share a bed. What follows is a tale depicting the complexities of family, especially the relationship between mothers and daughters, in modern Italy. Di Pietrantonio’s novel also gives us a glimpse into the very real hardships faced by many poorer Italians struggling to keep their lives from disappearing completely beneath the weight of poverty.

Goldstein’s translation of L’Arminuta as A Girl Returned is not quite exact, but it nevertheless encapsulates, quite poetically, the plight of the protagonist and her voyage of self-discovery. Her return is not just to her biological parents but, more important, a return to stability in an unstable world. When she finally learns the truth of why she was sent away from the only home and family she knew, we see her withdraw into herself, only to emerge later as a more independent and stronger young woman with a future. She doesn’t do this alone; she has the help of her sister, a younger, far less polished girl who shows her a way toward compassion and understanding.

There are parallels with Elena Ferrante’s Lenú, especially regarding the education of young women in Italy, but Di Pietrantonio’s novel is not merely a work riding Ferrante’s wave; instead, it offers us a passionate and realistic take on the fate of young Italian women in a world where they still have to fight for basic rights like education. Thankfully, we are now seeing more women writers pushing their way out of once-darkened corners to tell their own stories.