The Redemption of Time: A Three-Body Problem Novel by Baoshu 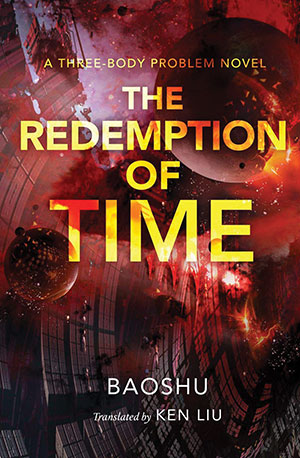 Sometimes readers just can’t let go. They are so in love with a character, a story cycle, or a fictional world that when the original author moves on to other books (or dies), they want more. Writers and publishers hasten to oblige.

Thus various authors still pen novels about Jack Ryan, a character created by Tom Clancy (1947–2013). Publishers churn out James Bond novels, undeterred by Ian Fleming’s death in 1964. And books set in the world of Jane Austen’s Pride and Prejudice (1813) and featuring its characters abound. Then there is fan fiction. Thriving outside the domain of commercial publishing, these are prequels, sequels, tie-ins, or entirely new stories generated by fans who freely appropriate characters, settings, and incidents from the works they love.

A veritable tsunami of fan activity surrounded the appearance of Chinese science-fiction writer Liu Cixin’s massive, compulsively engaging Santi trilogy. Originally published in China in 2007, 2008, and 2010 and translated into English as The Three-Body Problem (2014), The Dark Forest (2015), and Death’s End (2016), Liu’s work won awards galore and drew fans like a magnet. In no time the internet was chockablock with analyses, speculations, and fan fiction.

One such work was produced by Li Jun, a fan who went on to become an award-winning author in his own right, under his pen name, Baoshu. His contribution to the Three-Body fanverse first appeared online as a very long dialogue between two secondary characters from Death’s End. This he later expanded (in three weeks!) into a full-length novel. Well received by other fans, Baoshu’s work attracted the attention of Chongqing Press, publisher of Liu’s trilogy, who promptly produced a commercial edition, Three Body X: Aeon of Contemplation (2011). This book, ably translated by author Ken Liu, now appears before us as The Redemption of Time.

Why do you need to know all this? Because the appeal of Baoshu’s novel will hinge critically on whether you’ve read Liu’s original trilogy and, if so, how much of it you remember. Like much fan fiction, The Redemption of Time is steeped in allusions to characters, events, and concepts from its progenitor, all presented without explanation. If, for example, the names Cheng Xin, Thomas Wade, Luo Ji, and Guan Yifan; and if phrases such as sophon blind zone, the Staircase Program, dark forest strikes, curvature propulsion, black domains, and dimensional reduction mean nothing to you, it’s hard to imagine how you’ll make sense of The Redemption of Time.

You also need to know that vast portions of this book consist of characters telling one another about events—some quite spectacular and important to the story—that happen offstage. Much is told; little is shown. The first third of the book, for example, consists of a dialogue in which two secondary characters from Death’s End recount the events of that novel, filling in details and information Liu left out. One character, protagonist Yun Tianming, spent most of Death’s End as a disembodied brain who allowed himself to be captured by aliens hell-bent on conquering humanity. The other is his wife, an astronomer who, at the conclusion of Death’s End, was trapped with him in what Liu called a “miniverse.” Most of the second part is exposition, as a robot named Sophon explains at great length details of an eternal, galaxy-spanning war between the Master (loosely, God) and the Lurker (Satan), details you must understand to make sense of what will happen in the remainder of the book.

All of which is a shame. Because Baoshu’s book bristles with wondrous spectacle; and its scope exceeds even that of Liu’s trilogy, which began in 1967 China and ended with the heat death of the universe. The Redemption of Time also features provocative allusions to the Bible and explores ideas about such topics as the impact of time on human consciousness and the role of myths, especially creation myths, in shaping humanity’s conception of its place in the universe.

If taken on its own terms—as less a story than a series of dialogues punctuated with sometimes lengthy expositions, and after a close review (or first reading) of the Three-Body trilogy—The Redemption of Time offers much to enjoy and ponder. Those seeking more conventional mind-bending pleasures should consider instead reading (or rereading) Liu Cixin’s extraordinary trilogy.