Demonstrategy: Poetry, For and Against by H. L. Hix 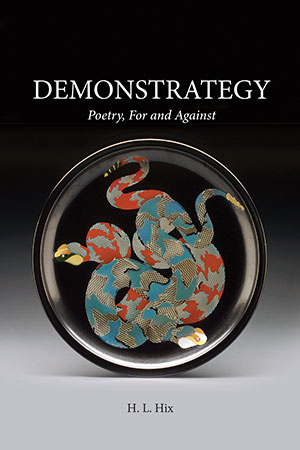 Demonstrategy: Poetry, For and Against is a difficult but important book. The difficulty starts with the title(s), and the best way toward decipherment is just to start reading. The semantic difficulty of the title’s nonce word is fairly easy to pick apart, but the analytical crux is that poetry (like philosophy, H. L. Hix asserts) is always, finally, about language, its own medium, the intermediary between its own practice and the practices of the world that would seek to disambiguate its usages for other purposes, what Orwell lamented as “the politics of language.” Poetry has its own purposiveness, of course, but begins, or should begin, with the recognition that language differs from other materials like potter’s clay or painter’s oil, which have no meaning before they are molded or brushed into shape. Language is a medium that spends what is already spent. “[A]ny word contains in itself a form of history, is itself a kind of history,” because it’s already embedded with a host of prior meanings and usages, exemplified by Hix’s crossworded title.

The subtitle expresses a precise philosophical ambiguity that may be initially misleading as well. Make no mistake about it: this is a philosophical book, despite the author’s claim that he is no philosopher. Hix, though, is a superb verse practitioner who is also one of our most learned and most nuanced writers about both the craft and theory of poetry. Those who are willing to engage both of those activities at the same time are the projected audience of this book.

This book also is profoundly “for” poetry: “humanity is dying for want of poetry.” At this point in our culture, however, one must learn to see how being “against” poetry, by entertaining that oppositional attitude, can help disclose a new method of addressing our deepest needs. In short, the key word in Hix’s subtitle is “and.”

Virtually all pedagogy and workshop practice pertaining to poetry is about “craft,” but Hix favors, in addition to this kind of “engineering” approach (a term he appropriates from the philosopher Amartya Sen), a kind of “metacraft” or “a self-conscious questioning of ideals and techniques that keeps open, rather than foreclosing, the issue of what poetry is and what it might be or do.” To realize this double approach to poetic practice (Hix calls it “ethopoesis”—he loves inventing terms) is to reassess how the materiality of poetry engages with actual worldly and philosophical problems: tyranny, environment, patriarchy, poverty, nationalism, identity, even, in one of his more provocative meditations, the idea of “genius” itself, which he connects with inherited Romantic assumptions and Anthropocene “exceptionalism.”

The heart of the book relies not on traditional close reading—that is, admiration for how well constructed a poem is—but on trying to discover what is at stake for both poem and poet in a given work. Let me cite only a few examples:

The recently appointed secretary of the Smithsonian, Lonnie Bunch III, was asked how he managed as a black man in America, and he replied, “I learned ambiguity.” Would that more administrators might learn such a strategy, but it’s also crucial to Hix’s thesis for poets: embrace the inherent ambiguity of language, resist “facile contrasts,” and yet “recognize the role opposition plays in constructing meaning.”