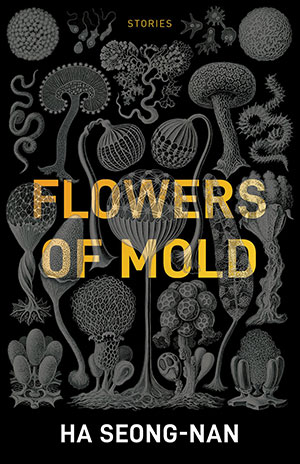 Flowers of Mold, Mouthful of Birds, Apple and Knife, The Night Circus, Alphaland, Mars—these are just a few of the surrealist collections by women writers from around the world that have been published in the last two years. Whether the authors write in Korean, Spanish, Indonesian, or any other language, their stories teeter on the edge of the fantastic, guiding readers into seemingly mundane narratives only to rip the rug out from under us to expose reality’s dark underbelly. One wonders if this trend is due to the anglophone world demanding more of these stories in English or if this kind of story is a reflection of the zeitgeist. Either way, surrealist stories like those in Ha Seong-nan’s Flowers of Mold invite us to look at our world anew and take notice of the nameless people we pass on the street each day. Like The Vegetarian—another surreal and haunting text by a Korean woman—Flowers of Mold unsettles and unnerves, effortlessly. Here we should thank Janet Hong, whose translation so beautifully captures this tension.

Of the ten stories included in the collection, three are speculative (“Waxen Wings,” “Nightmare,” “The Woman Next Door”) while the other seven explore how characters can be haunted even when there’s nothing supernatural about their situation. Taken together, these stories provoke a kind of existential dread that is at once terrifying and familiar. It’s unclear in “Waxen Wings” whether or not the narrator is haunted by an actual ghost of her past self or just a figment of her imagination, but ultimately all that matters is that her efforts to fly have resulted in her disfigurement, reflected in the text’s deadpan style. “Nightmare,” however, explores the nature of memory in the face of violence, with dead bodies appearing and disappearing, until one can’t tell reality from a horrifying dream.

In “The Woman Next Door,” one of the collection’s most powerful and disturbing stories, a timid, lonely woman who is ignored by her husband and son befriends a new neighbor. Before her (and the reader’s) very eyes, that neighbor slowly takes over her life, starting with a borrowed spatula. Once again, memory gaps and disorientation turn a seemingly normal life into a nightmare. Ha deftly and relentlessly depicts the neighbor metaphorically sucking the life out of the lonely woman.

The unbridgeable gap between men and women and their inability to escape the claustrophobic space of the city informs both “Your Rearview Mirror” and “Onion.” Each of these stories ends with an unlikely couple attempting to flee their respective pasts and getting into horrific traffic accidents. The sights, sounds, and especially smells of the city are heightened in Ha’s text: the same billboard ad shows up in two different stories, while the almost tangible stench of rotting garbage emanates from “Flowers of Mold,” “Toothpaste,” and “Early Beans.” Charles Baudelaire’s Les Fleurs du mal comes to mind, both because of the similarly jarring titles (“Flowers of Mold” and The Flowers of Evil) and because Baudelaire too used a sophisticated literary style to discuss, for instance, roadkill, haunting shadows, and a city’s spiritual and physical decay.

Flowers of Mold offers readers an alternative perspective on city life, relationships, and ambition; and while it may be dark and unrelenting, it is also hauntingly lyrical.