The Fallen by Carlos Manuel Álvarez 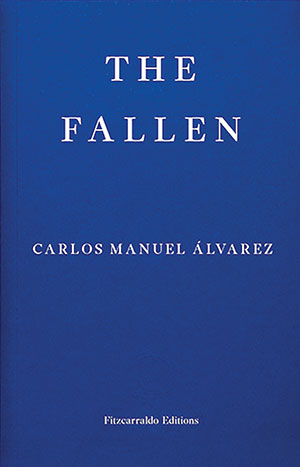 In January of this year, I had the pleasure of meeting Carlos Manuel Álvarez in Havana. We met at Café Fortuna Joe, a hipstery coffee house in Playa, a municipality of Havana. We exchanged books and discussed Sergio Pitol, whom I translate and, it turns out, is a writer whom Álvarez greatly admires. I offer this as a preface in the interest of full disclosure.

Los caídos is not the book I expected. (I mention the Spanish title because I read it first in Spanish.) That is to say, it is not the descendant of the twentieth-century Cuban neobaroque—Lezama Lima, Sarduy, Arenas—to which many readers of Cuban literature may be accustomed; it possesses none of the Joycean wordplay one finds in Cabrera Infante (although Álvarez regards Cabrera Infante’s journalism as one of his major influences); it is not the detective novel of Leonardo Padura, the dirty realism of Pedro Sánchez, or the  testimonial narrative of Miguel Barnet; nor is it the anti-Castrist autofiction of his rough contemporary Wendy Guerra. On the contrary, unlike Guerra’s narrative, Álvarez’s critique of Castrism is not trumpeted in solipsistic fanfare. It is delivered in the mournful rhythm of the bolero.

With The Fallen we are witness to the birth of a new wave of Cuban prose, influenced by the crónica (a hybrid journalistic genre that is at once informative and interpretive), conceived out of his formal training as a journalist, and nurtured by his literary mentors, among whom Capote and Wolfe figure prominently. And Hemingway. In fact, there is much of Hemingway in The Fallen, most of all Hemingway’s restrained prose, “stripped to its firm young bones,” as Dorothy Parker described it.

Structurally, the novel is divided into five numbered sections, which in turn are divided into four monologues, labeled successively: The Son (Diego, who is finishing his compulsory military service), The Mother (Mariana, a teacher who has become homebound due to epilepsy), The Father (Armando, a fervent socialist who manages a state-owned luxury hotel), and The Daughter (María, who, disillusioned with socialism, has abandoned her education to work as a waitress in the hotel her father manages). Together, and separately, these characters represent the disparate but overlapping lives of today’s Cubans.

Álvarez begins his novel with an exordium: “Everyone has a home and that’s where the troubles begin,” an apt epigraph for a novel that depicts the psychic trauma inflicted on a Cuban family in the 1990s, an era of extreme hardship and deprivation referred euphemistically to as the período especial (special period), a euphemism Álvarez rejects in favor of the more realistic años duros (difficult years). Simultaneously, the family portrayed in the novel functions as a metonym for contemporary Cuban society at large. And while Álvarez denies that The Fallen is a political allegory, it is difficult not to read it as one. What is certain is that The Fallen is a novel about a society in collapse under the crushing weight of Cuba’s failed socialist project.

I wanted to like this translation very much, partly because I welcome Álvarez’s introduction to an English-speaking audience and partly because I know the reputation of its translator. And while there is much to like about it, I didn’t enjoy it as much as I had hoped. While Frank Wynne’s prose is generally fluid, the (apparently) indiscriminate use of negative contraction and noncontraction (“She doesn’t feel ill” and “I ask why he does not send”) renders the prose uneven at times. What’s more, his British idiom seems out of place—almost anachronistic—for this text. I say this aware that Wynne is Irish, and that it is absurd to expect that he write in any other idiom. That said, while much of the academic and literary world today is committed to decolonizing literature, the translation’s British idiom, in a way, could be read as a colonizing act, in which expressions such as “had a fall” and words like “sentry” seem alien, at least to the American reader. Equally discomfiting is Wynne’s decision to leave in Spanish words like hijo (son), frijoles (beans in Cuba are black, while to Americans frijoles suggest brown or pinto beans used in Mexican cuisine), and barrio (often carries a negative connotation not present in the Cuban Spanish). At best, these foreignizations can cause some degree of cultural dissonance; at worst, they reinforce a mistaken notion that all Latin cultures are the same. And because there is nothing culturally specific about the word zambrán (a military duty belt), one wonders what was gained by leaving it in Spanish. Wynne more than compensates for these infelicities, however, with beautiful lines such as “The day dawns twisted out of shape” (El día nace torcido).

The Fallen is Álvarez’s third book and his first to be translated. Named to the prestigious Bogotá39 list (of the thirty-nine Spanish-language writers under forty to watch) in 2017, one hopes to see more in translation from this writer. A US edition of The Fallen is due out in 2020 from Graywolf.