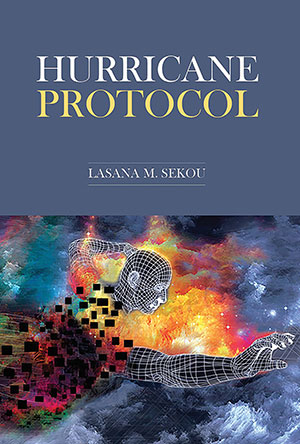 The latest poetic effort of the revolutionary poet of St. Martin, Lasana M. Sekou, drags us into the whirlwind of his words right from the start of the collection with a traditional proverb: “The gale doesn’t stop at the frontier.” Be it an imaginary frontier, such as that still dividing St. Martin between the Netherlands and France, or a metaphysical frontier, such as the threshold we cross when we start reading a book, the hurricane does not stop in any case.

Written in memory of the devastating hurricanes Irma (Sept. 6) and Maria (Sept. 19) that ravaged St. Martin, and many other Caribbean islands, in 2017, this collection of poems materializes Edward Kamau Brathwaite’s statement that “the hurricane does not roar in pentameters” (History of the Voice, 1984). And in the roar of Hurricane Protocol, Sekou significantly tackles a climate phenomenon that seems glaringly absent from the region’s arts, despite its annual destructive recurrence.

The book’s title derives from the Mayan word huracan, which the poet identifies with “a K’iche’ Maya god of wind, storm, fire, and one of the creator deities”—and explains further as “Huracán in Spanish; in Mayan languages Hunraqan (‘one legged’), and often U K’ux Kaj (‘Heart of Sky’).” The poems are studded with a constellation of images portraying Mayan gods taken from the Dresden Codex. It is no news that Mayan astronomy was advanced and that their understanding of the cosmology is recorded in glyphs, but what’s salient is the attention Sekou gives to the ancient remnants of Amerindian culture scattered in his writings.

Many of the poems are titled as dates of a diary, whereas the square brackets in “[A] Statement” and “Back matter[s]” seem to hinge the beginning and the end of this cyclone period as nailed wooden panels. Particularly relevant are the poems “11.8.17”—that solders “reports” of post-hurricane looting with the 1648 Treaty of Concordia, which “records” the colonial split of the island in half—and “11.14.17”—which graphically reproduces a cyclone in words, splitting the page in half and digging into the relics left by the hurricanes “movingallovertheplace,” mixing St. Martin “nation language” with French Creole and Spanish, transforming Miami in “mayaimi.” Another powerful collection by Sekou, whose lines buckle the reader up for “hurricane protocol.”