I Am a Rohingya: Poetry from the Camps and Beyond 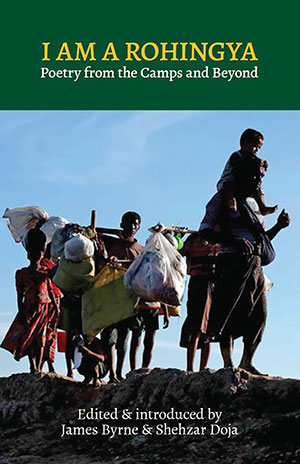 This important book is the first English-language anthology of poetry written by Rohingya poets, and these vital poems command our attention, memorializing people and places while speaking back to politically orchestrated genocidal dispossessions (see WLT, Spring 2019, 26–31). Refugee poets contributing to this exemplary book include students, school teachers, journalists, folk singers, editors, and translators; tellingly, many use a pseudonym, and “only basic information is given to protect poets’ safety.” Written predominantly from within the world’s largest refugee camp, the so-called Cox’s Bazaar, these catalyzing works arguably constitute some of the most consequential poetry being written today. A moral onus lies with readers: These poems emphatically ask that we each read empathetically while listening closely.

Demonstrating a collective and courageous refusal to acquiesce or be silenced, I Am a Rohingya instead chooses to “shout for justice” while challenging readers: “Am I not a human being?” Ro Anamul Hasan wonders. Co-editor James Byrne reminds us that “[t]he Rohingya are, without doubt, one of the most persecuted people who live on our shared earth. And they are speaking to you now,” stateless, from within dehumanized zones of forced exclusion. These poems speak harrowingly of profoundest loss, suffering, precarity but also of nostalgia; despite the ongoing pogroms, many texts in this book speak of their poets’ yearning to be included as sovereign citizens within the Burmese state.

In the interview that concludes I Am a Rohingya, poet and activist Mayyu Ali asserts, “We love our motherland like others do. Historically, geographically, ancestrally, we belong there.” At the “apex of inhumanity,” beyond the Burmese government’s monstrous ideological violence, this poet quietly wishes for experiences that many of us may take for granted: “Just to feel once the full meaning of freedom, / My heart wishes / Just to walk once around my own world.”

Amid the brutalities, this poet’s wistful reflection echoes throughout other works in the anthology, and indeed in the absence of a coordinated global condemnation of the Burmese military’s recent exterminatory displacements of Rohingya people, these poems are feats of resolute fearlessness. As Ali asserts, heartrendingly, “If we don’t have the support from inside Myanmar or from the international community, we will have to find hope within ourselves.”

Other contributors to the book may agree, for “[w]hen love is this pure it holds onto hope.” But beyond these avowals, those surviving the murderous persecutions are “transformed into the living dead.” Of course, many poems in this book centralize trauma, and bearing witness remains the anthology’s energizing logic; as Yar Tin understands in “Too Much Bitterness,” surviving barbarism takes a toll that poetry simply cannot assuage: “To make rhymes out of gunshots, / To make poetry out of death and destruction, / This heart of mine is not skilled enough.”

For readers, a challenge remains: In which pragmatic and empowering ways are our hearts skilled enough to meaningfully intervene? So many of the shocking accounts located in this book refuse bitterness or hostility, requiring only that we too gaze unflinchingly in reflection on the episodic ethnic cleansing in Myanmar. But this carefully courageous book asks that we not only read and listen. Amid the atrocities, I Am a Rohingya speaks indomitably, in eyewitness accounts; among those who read it, may this book inaugurate a cascading ripple of our loudest support, cried publicly in protest and indignation.