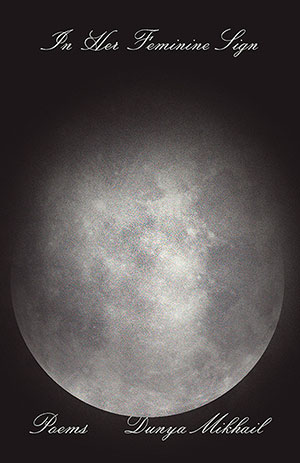 Throughout this newest collection, Dunya Mikhail writes poems of cities, friends, grandmothers, goddesses, of girls who might “outgrow / their dresses / while on the road” to captivity. The poems offer a chronicle of internal life in the landscapes of exile and remembered homeland, always foregrounding the experiences of women. The first section of In Her Feminine Sign is entitled “The Tied Circle,” a reference to the Arabic name of a letter, taa’ marboota ة, that is often a feminine marker for nouns. The tied circle hovers over these poems as astrological sign, as both weather and roadmap.

The poems In Her Feminine Sign are also marked by Mikhail’s particular language, its graceful shifts between fable and plain-speaking. Fossils are reanimated and birds flit between the pages, answering the silences and laments of the various speakers. Beyond the reductive trope of “witness” often inaccurately assigned to writers whose lives unfold in times of war, Mikhail’s poems embody the world that necessitates her work, seamlessly navigating eras and continents. These are not poems about war or exile or trauma. They are poems that emanate from the women who live them, those who survive and those who are remembered.

Mikhail’s poetic recalls an Arabic style known as al-sahl al-mumtane’, language that delivers information and emotion with great fluidity but without excess, a kind of lucid restraint that contains multitudes. In “Baghdad in Detroit,” Mikhail traverses decades and wars and their attendant traumas without ever naming them, conjuring, instead, lived experiences of devastation and survival. “A butterfly from the Tigris shore / alights on my hand. / No bombs today to scare her away. / They say it is the Detroit River.”

In the second section, entitled “Tablets,” after the Sumerian clay tablets that are the first record of human writing, Mikhail presents a series of short, imagistic poems that she calls “Iraqi Haiku.” The poems do not have any discernible syllabic restrictions, but they retain the haiku’s meditative qualities and direct style of expression. The tablet poems alternate between reflection—“the flame opens like a giant plant / swallowing them one by one”—and direct address: “Ask not how many houses were built. / Ask how many residents remained in the houses.” The cumulative effect is both a deepening and rising intensity; each poem is progressively more devastating.

In her author’s note, Mikhail reveals that she wrote these poems twice, in Arabic and in English, but she insists that they are not translations. She describes the writing as the making of “a new ‘original’” and refers to this book as the English edition. It’s an intriguing revelation, which makes the reader aware of the presence of a set of partner poems but withholds them. Knowing calls attention to the absence.

The final section of the book, “T/here,” engages the illusory nature of place in the poet’s experience and contains some of the most striking poems of the collection. Of particular note is “What We Carry to Mars,” a poem written in long lines of text separated by stanza breaks so that it drifts through the reader, like so much of our digital communication. Mikhail develops the images in each poem to their full capacity. The tenderness, longing, and ultimately hope in the poem “Flamingo” are a signature of her art. The speaker reports that flamingos migrate “back to Iraq / after a twenty-year absence,” then folds herself into the “half-hearted Valentine” that a pair of them make. In that first line, civilizational destruction, species extinction, time, and so much of what is lost are evoked. But throughout the poem, hope braids with longing, the slender coral-colored bird returns, the speaker writes of flying home again.