The Sword and the Spear by Mia Couto 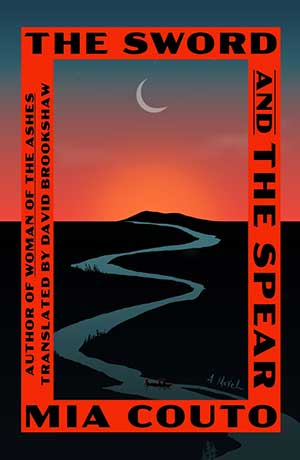 MASTER STORYTELLER MIA COUTO frames an inspired tale with actual events in The Sword and the Spear. The novel illustrates polarization transcending time and place, demonstrating evolution of the Other. Questions of gender dominance, identity, and home loom large.

So begins this second volume of Couto’s Mozambican trilogy, Sands of the Emperor, following the first, Woman of the Ashes (see WLT, May 2018, 64). David Brookshaw translated both. (The saga ends with The Drinker of Horizons, out in Portuguese but not yet in English.) Book 2 recaps the first in the introduction, adding a glossary of African and Portuguese terms plus historical figures. Each volume is an independent novel. Read together, they encompass the story arc of an actual African king resisting colonization. Mouzinho represents the colonizer brandishing the sword. Ngungunyane holds the spear. Several thousand watch him surrender.

Describing only that fateful 1895 meeting would be fascinating, but Couto is far too gifted a writer to settle for that. Blending myth, visions, and imagination, he selects two characters to narrate. Germano and Imani also typify the sword and the spear—love across cultures. As in Woman of the Ashes, Couto alternates their chapters: Germano in letters to his military superior, Imani in memoir. Sometimes facts weaken their voices. Past events merge with current in flashbacks. The two describe surroundings—people delivering speeches atop tall termite mounds or Katini playing his marimba.

Most characters miss home but have trouble defining it. Ngungunyane creates child soldiers from other tribes by giving them a home. Imani questions her soul’s color as well as her new role to Ngungunyane: queen, wife, or slave? Racial divides and clashing cultures create what Couto calls “worlds in collision.” A priest asks: “What is it to be African?” Colonizers rename rivers, “civilizing” Imani’s language. Literacy gives her power but dilutes her identity as her race is erased. Conversant in two tongues, she’s at home in neither. Portuguese writer José Saramago’s epigraph underscores this linguistic point.

Couto illustrates how crying “Mine!” while pushing others aside, claiming what they have, generates a schism. Imani’s mother counsels her on racial insults. Polarization begins by debasing others, chipping away languages or traditions—until the Other materializes. Us cannot occur without establishing Them. As Couto notes, wars need enemies, and walls are built around fear of the unrecognizable. Must the world be homogenized?

Ngungunyane, like Claudius in Hamlet, killed his brother to become king, resulting in nightmares. During an eleven-year rule, Ngungunyane resisted Portuguese colonization. His story symbolizes a global saga—another empire grabbed by greed from afar. Recall the Spanish in Peru when Pizarro executed Atahualpa, the last Inca emperor. Consider Apache leader Geronimo surrendering to the US military. Four different world powers claimed Micronesia’s 2,100 islands over the centuries. In The Dancing Other, Suzanne Dracius addresses Caribbean issues in Martinique, governed by France (see WLT, Spring 2019, 104).

Couto’s trilogy explores imperialism, identity confusion, and cultural miscommunication between colonizers and indigenous peoples anywhere. Literary and psychological symbols abound in The Sword and the Spear, from the Holy Grail to feverish Freudian dreams. Even if readers already know Africa, the novel enlarges worldviews—and Couto does so in lovely (at times witty) poetic prose. His themes are reminiscent of Barbara Kingsolver’s The Poisonwood Bible (inspired by Jonathan Kwitny’s Endless Enemies) and J. M. Coetzee’s Waiting for the Barbarians.

As the nineteenth century draws to a close, so too does the seventy-eight-year-old State of Gaza. The Sword and the Spear ends as it began: people in a boat on “The Last River.” Mouzinho is taking the conquered Ngungunyane, his seven wives, and his son Godido to Lisbon—with Imani as interpreter. Alas, Germano is not going. “Everything always begins with a farewell.” That’s both the initial and the final sentence of The Sword and the Spear, a bridge connecting all three volumes in the trilogy. Imani leaves her adolescence as the first concludes. Entering the third, Imani says goodbye to the Kingdom of Gaza, for it, as well as the book, has ended.