And after Many Days by Jowhor Ile 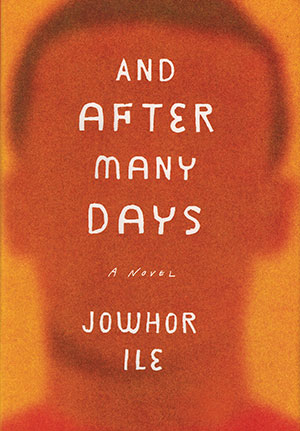 After seventeen-year-old Paul Utu tells his younger brother, Ajie, of his plan to visit a friend, he vanishes one afternoon in 1995. That event and its cost to his upper-middle-class family propel Jowhor Ile’s debut novel, a dark portrait of postcolonial Nigeria.

Shuffling time, Ile mixes pasts in books 1–3, past and present in book 4 (occurring ten years later). Early chapters sequentially detail the Utus’ denial, then gradual acceptance, of their baffling loss, but most of books 1–3 offer nonchronological snapshots of the Utus, with Paul, their wunderkind,engaged in family activities—watching a favorite television show, pillow fighting, reading a newspaper. This strategy deepens the sense of foreboding arising from Paul’s mysterious disappearance.

Violence looms in the world outside the family, while NEPA’s power outages—emblems of Nigeria’s instability, despite its wealth—disrupt their inner sanctum. Frequent references to Paul’s disappearance, inserted into chapters that predate it, chillingly evoke and underscore the loss to come. Thus, for example, as Paul and Ajie listen to rock tunes in their uncle’s car, the narrator remarks, “This was a year before the afternoon when everything changed.”

Ile’s settings likewise show that whether in city or country, private and public realms collide disastrously. The Utus reside in Port Harcourt, home to student protests, but regularly visit their rural roots in Ogibah, whose villagers and lands the neocolonial Company increasingly threatens.

The narrator’s measured voice mediates horrors (e.g., Paul’s story, political executions, the military’s killing of Ogibah boys) and elides emotions stirred. So, for instance, when the television first reports Paul missing, his mother retreats to the kitchen, emerging later with “red and puffy” eyes. Having to imagine what is screened intensifies its power.

Shadowing Ajie’s consciousness, the narrator tracks his growth. Feeling guilt for having let Paul go, this adoring, if envious, sibling transforms into a pub-crawling, British-schooled expat who journeys home just once in ten years until Ma, his father dead since the year Paul vanished, asks him and his older sister to return, suggesting only, “It’s about your brother.”

In And after Many Days, Nigerian lives seem just as insecure as NEPA’s power supply; neither class nor culture can guarantee their safety. Book 4 reveals Paul’s fate, a gratuitous “accident” caused by systemic greed, neglect, and fear, and Ajie, grown wiser, oversees Paul’s burial in Ogibah. Ile’s modulated prose has shaped an elegy for Nigeria’s people.