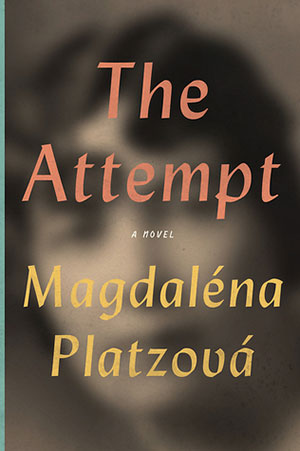 Anarchy has not quite yet faded into the history books. This politico-philosophical movement, which espouses self-governing societies and opposes corporate greed, shows its vitality in The Attempt vis-à-vis Occupy Wall Street rallies. Magdaléna Platzová, a contemporary Czech novelist, opens and closes her latest story at encampments with this protest group. Many readers may feel intimidated by a text about anarchy, but Platzová offers up a lively story via three interconnecting vignettes in this slim paperback.

Jan Schwarzer, a thirty-nine-year-old Prague native, is in Manhattan participating in the protests. You might say that anarchy runs through his bloodline. Jan could possibly be the great-grandson of Andrei B (the fictional version of Alexander Berkman, the Russian anarchist). Berkman’s 1892 attempt to assassinate Henry Frick, the Pittsburgh industrialist/financier, is the hinge on which the story revolves.

Jan’s late friend, a writer named Josef, had been obsessed with Andrei and fellow activist Emma Goldman (“Louise”) and was convinced that Andrei’s 1924 affair with Jan’s great-grandmother resulted in Jan’s secret family line. Combing through Josef’s belongings after his death, Jan runs across a notebook entitled “Anarchista,” an unfinished manuscript on Andrei’s life. Penned on the inside front cover was “Everything was easier under totalitarianism.” Jan feels a compulsion to finish “Anarchista” whether Andrei proves to be his relation or not.

The second vignette concerns the Henry Frick family (Kolman) and their old family letters. The final third of the story centers on letters between Andrei and Louise, which he reads between the lines, hoping for clues about his great-grandmother.

Platzová’s use of letters throughout the story is an interesting maneuver, granting us a painless history lesson along the way. A native of Prague, the author was teaching in New York while writing The Attempt and admits to sympathy for the Occupy Wall Street movement. Another sentiment from Josef in “Anarchista”: “There is no way to live in accordance with our conscience.” The movement, she believes, was trying to disprove this.

Platzová demonstrates an understanding of anarchy and has a remarkable ability to explain it without dumbing it down. Despite its US setting, The Attempt is very much a Czech novel with Czech sensibilities and references cover to cover.