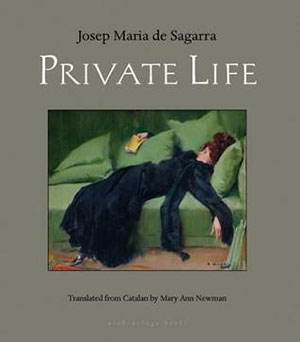 When news stories of low wages and mounting student debt are reported side-by-side with reality TV stars and wealthy elites, it almost seems that we are in some kind of reenactment of The Great Gatsby. In a time of income disparity and a general shrinking of the middle class in many countries worldwide, it is apropos that Mary Ann Newman would create a new translation of the Catalan novel Private Life by Josep Maria de Sagarra. The novel itself is concerned with holding up a mirror to Barcelona’s elite, exposing all the selfishness and audacity of wealth and power in the early twentieth century. This is a text that has remained largely inaccessible to the English-speaking literary world due to the absolute scandal it caused when it was first published.

Newman’s translation of Sagarra’s 1932 novel linguistically conveys all the sordid truths about Barcelona’s one-percenters that the original Catalan version so candidly revealed. The very language itself clues us into a way to understand the tone of the novel: Sagarra teaches us how to read these characters and each scene. Newman deftly shows those of us in the English-speaking world that one of the female characters had an “indifferent and inhospitable” physiology that has “the chill of a cemetery” and “provokes virile dissatisfaction,” while another character displays his disappointment “with dignity.” Writers understand the weight of a single word, and from the opening scene of the novel, the reader understands that the characters at hand have led banal, unimaginative existences.

One might compare Sagarra’s Private Life to Hemingway, Camus, Flaubert, or Proust, whose wealthy, bourgeois, narcissistic characters illustrate moral ineptitude. Newman’s choices in language for this translation indeed direct the English-speaking literary world to view the upper classes of the early twentieth century as the character Frederic is described, possessing “all his banality and moral inconsistency.” Sagarra’s novel deserves a position in the literary canon of twentieth-century Europe, and Newman’s new translation will certainly boost its chances.