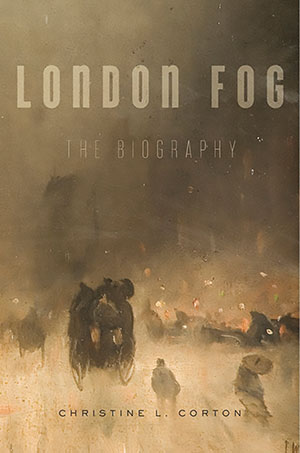 Debates swirl as to whether and to what extent humans have affected and can affect the climate. Not surprisingly, studies of climate’s effect on human culture find attentive readers. Adam Gopnik’s elegant essays in Winter: Five Windows on the Season (2012) and Cynthia Barnett’s acclaimed Rain: A Natural and Cultural History (2015) set the stage for this study.

London Fog is a fascinating account of London’s climate from the seventeenth century to the 1960s, when pollution abatement measures began to have a real effect. Smoke from seacoal used by breweries and coal or wood fires from homes intensified during the industrial revolution of the late eighteenth and early nineteenth centuries, bringing both factories and increased population. A “Peasouper” or a “London Particular” became terms for the thickest and longest-lasting fogs, usually occurring in winter when all the hearth fires were burning.

Exhaustive research surveying accounts from the famous and obscure, residents and foreigners, artists, cartoonists, and authors creates a weighty mass of testimonies on the appearance, smells, psychological and social effects of London fog through the years. I confess to growing a bit weary at each new account focused on describing the fog in terms not remarkably different from earlier descriptions. In a sense, however, the book will serve as an essential reference on the subject.

The most interesting portions of this study are the Punch cartoons, the paintings variously foregrounding or erasing the fog to meet the tastes of the times, and the fiction writers’ use of the fog. Before Turner, Whistler, and Monet, before impressionism took hold, painters risked their popularity if they presented realistic scenes of London landmarks obscured by fog.

There is ample testimony from major and minor writers—Dickens, Doyle, Wells, Galsworthy, and James among the former. Popular minor writers created what Corton calls “fog apocalypse stories,” in which the fog functions as a suffocating shroud that characters desperately seek to escape.

Curiously, Corton does not mention London fog’s significant use as a framing metaphor in Joseph Conrad’s Heart of Darkness, where the moral darkness Marlow saw in King Leopold’s Congo is connected to the gathering gloom “brooding motionless over the biggest, and the greatest, town on earth.”

Did the fogs contribute to literary and artistic impressionism, to the sense that chance, disorder, and potential chaos are natural to the modern world? Corton is cautious on that score, but her citations build a case.