Where the River Parts by Radhika Swarup 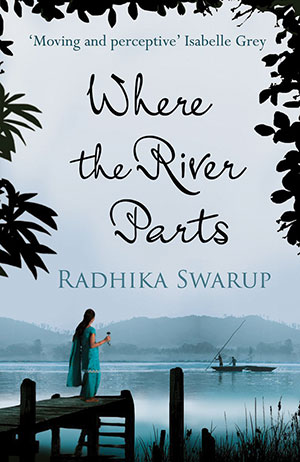 In 1947 India and Pakistan gained their independence from England and from each other. Millions fled from one side to the other to escape the violence; thousands more were murdered, abducted, or dismembered. Authors on both sides have written about the violence and continued tensions between the two countries to try to reconcile the bloodshed. Radhika Swarup’s novel fits within this body of literature, known as Partition literature, narrating the forbidden love between a Hindu woman and a Muslim man, the woman’s flight to India, and her attempt to rebuild her life. If you are an avid reader or scholar of Indian literature, this story will feel familiar with the predictable characters and themes that comprise Partition novels.

Where the River Parts is told through the perspective of Asha, a Hindu woman born to a wealthy family. It begins before Partition, when Asha falls in love with Firoze, her Muslim neighbor and best friend’s brother. Despite their religious differences and the laws that forbid their relationship, the two plan to marry. However, Pakistan and India split before they wed, and Asha’s family flees as the violence grows and their home is attacked.

Before they reach the border, her family is murdered. Asha witnesses their death and barely escapes being assaulted. She reaches Delhi, where she finds Om, a family acquaintance and former suitor, and marries him. Like other novels on the Partition, Swarup’s is filled with common tropes, from Asha’s miscarriage on the way to Pakistan to the stories of both violence and rescues by Hindus and Muslims alike. Swarup appears to be aware of this commonality and uses the shared sense of horror to try to connect characters.

Sanam, a Muslim refugee hired to be Asha’s servant, becomes a key, albeit minor, figure for expanding the horrors beyond religious borders. Like Asha, Sanam witnesses her family’s murder and is raped. She gives birth to a girl, Priya, whom Asha adopts as her own to conceal her infertility. Sanam narrates a chapter that separates the two time periods, Partition and the nuclear tensions in the 1970s. Her chapter is a break in the narrative and in style, and where I think the novel begins to deviate from other Partition narratives. Here, the comparisons between the two women are drawn out beautifully.

The second half of the book returns to the tensions between Hindus and Muslims. Asha’s granddaughter wants to marry a Pakistani yet her daughter, Priya, refuses to accept the match. The last half, like the first, returns to the binaries in its characters and to similar stories of national tension. Though not a new story, for someone looking to explore Partition literature, Where the River Parts may be worth reading to get a sense of the event that still captures authors’ imaginations.